Alice Galletly reviews a black barley wine, and finds it to be nothing but trouble.

It’s Monday night and I am in the kitchen dancing to Black Sabbath’s “War Pigs”. I only vaguely know the song from when Dad used to play his Best of Black Sabbath CD while he mowed the lawn, but that doesn't stop me from trying to sing. There’s an eggplant Parmigiana in the oven and it’s burning, turning a very heavy metal shade of black.

This is what Panhead Brewery’s Black Sabbath – an 11% black Barley Wine – did to me. Somewhere between my first and third sip I got a bit drunk (note to self, drink this with food next time – maybe an entire loaf of bread), put Ozzy Osbourne on Spotify and forgot entirely about dinner. 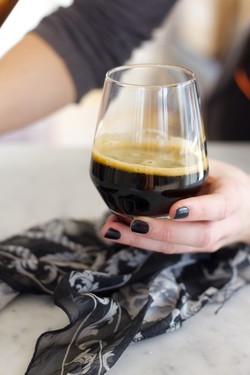 A heavy metal shade of black

I should have known what I was in for as soon as I sniffed it. It smelled like trouble: like bourbon and tobacco and dark chocolate and coffee, as well as tinned plums and dried cherries. It smelled like a place you could disappear into and never reappear from – like a black hole or the cat videos on Youtube.

I spent ages just sniffing it, swirling the unctuous dark liquid around in my glass and wondering if I was tough enough to take the next step, but eventually it pulled me in. Those wicked flavours carried through into each thick, boozy sip – smooth and sweet, with a twist of bitterness at the finish and a little alcohol heat down the throat.

Panhead’s Black Sabbath ruined my dinner, it annoyed my neighbour (probably), and it made me perform a very sad approximation of “moshing”. Suffice it to say, I loved it.