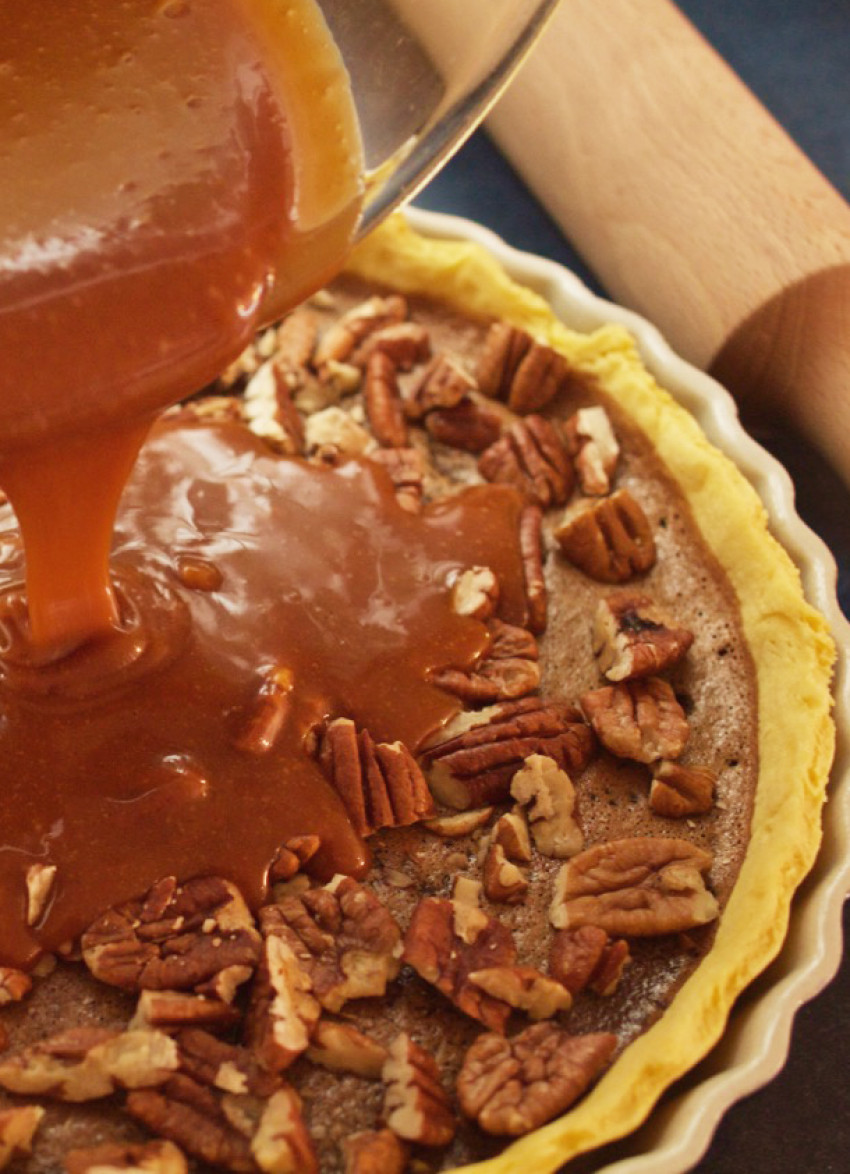 Our practical recipe book reviewer expected Kirsten Tibball's Chocolate Pecan Tart  to be a "walk in the park". That wasn't quite the case...

My brother's usual retort when asked what he'd like for his birthday is, “Nothing... actually, chocolate". So this year, I decided to force him to pick something for me to make him and from what better book than Chocolate. The author, Kirsten Tibballs, started an apprenticeship in a small patisserie at the age of 15 and is now a world renowned pastry chef and chocolatier. She's been a guest on Masterchef hailed as “The queen of all things chocolate”. After a couple of days my brother brought the book back with no idea what to pick, so together we settled on the Chocolate Pecan Tart – it sounded interesting and delicious but not too tricky. I actually thought this would be a walk in the park, but as you'll find out, it really wasn't.

My first priority was to find a tart ring the right size. When I called one of maybe three stores in Auckland that would stock tart rings, they had a 24cm instead of a 25 – good enough. But when I got there the ring was nowhere near tall enough to contain all the filling the chocolate pecan tart seemed to require... I'd bought ingredients and had committed to the pie and I was also running out of time to make it. I had to step up to a slightly taller 30cm tart ring at three times the price of the 24cm... ouch. Slightly begrudgingly I told the man in the shop I probably will never need to use it again – he suggested I could maybe fashion it into a halo for a festive angel costume for Christmas parties. A hot tip for anyone with a disused tart ring lying around.

It was still a pretty small batch of pastry dough... really small actually. I decided to make another half of the recipe again separately then I put it all in the fridge to chill.

While the pastry was resting I started making the baked chocolate custard by heating milk and cream in a saucepan and then pouring over dark chocolate to melt it. In a separate bowl I mixed together egg yolks, honey, sugar, melted butter and vanilla bean paste. I added the chocolate mixture and whisked to combine.

After resting for an hour I pulled the dough out, and started rolling it out. It didn't seem anywhere near enough, I doubt I would've been able to fill a 25cm tart ring, let alone the 30! but I did my best job carefully rolling the pastry out to be a neat circle and filled the ring, following the instructions in the book and patching a little tear or two. Then I trimmed the top, lined the pastry with baking paper and decided to use my new ceramic pie weights instead of filling the paper with rice.

Look I'm not proud of this next bit but you know sometimes in the kitchen stuff just happens. I probably didn't have enough pie weights, I probably should've screwed up the baking paper first so I could push it up against the sides better and I probably shouldn't have tried to line the tart ring with such thin pastry, but I did. It didn't turn out great.

While the pastry was baking the sides came loose from the tart ring and started folding inwards. I only noticed when it was half cooked. I didn't want to waste that pastry and I already had the custard waiting to go, so I tried in vain to quickly patch the sides up with more pastry and a complicated structure of metal spoons and forks to support the edges. I thought I was a kitchen genius and I had fixed my mistakes, after all who is going to see the inside of the pastry? Then I foolishly filled it with the liquid custard mixture which started leaking out from, strangely all of the places I hadn't needed to patch. Defeated, I quickly dropped the tart in the sink to catch the custard leak. Then I calmly washed everything, made a cup of tea and started again.

This time I decided to use double the pastry recipe from the get go and also to just use a regular pie dish. I hate pastry. I don't know why but no matter how many times I've tried it I never seem to get it right, but at least in a pie dish around the right size I don't have to roll the pastry out so huge and the custard would have no where to go even if it did leak.

So I repeated everything up to lining the pie dish, this time it went smoothly, pastry not too thin, no holes. Excellent. I screwed up the baking paper into a ball and then flatten it out again which allows me to form it to the sides of the pastry better and I even have enough pie weights for this sized pie dish. Having now baked the pastry successfully I turn down the oven, add the new batch of custard and bake for an hour. At some point in the midst of disaster I had roasted the pecans so at least they were ready to go. Things are looking up for me!

While the custard was baking I started making the caramel. The caramel recipe seemed... strange. The first thing that caught my attention was honey and then lemon zest? Vanilla bean seeds? But I followed the recipe, first I put honey, cream lemon zest, vanilla bean seeds, glucose and salt into a saucepan and brought it to a boil and then I turned off the heat and left it to keep warm. Then I caramelised some caster sugar in a different pan until it had turned a nice rich brown at which point I carefully poured in the honey cream mixture and stirred to combine while (as expected) it bubbled furiously.

Then, while it was still warm I poured the caramel over white chocolate to melt it, and then mixed until it was combined. When the custard had cooled down to room temperature, I arranged the pecans on top and poured over the caramel. Then I left it to cool in the fridge before eating.

I thought it would firm up more but the caramel was still viscous when I cut into the pie and made serving it a little tricky. I thought the chocolate custard was really nice, so smooth and subtle. But then the caramel seemed to overpower everything, it was very sweet and strangely tangy with the lemon. I think to be honest, I would've preferred a regular pecan pie, there was too much going on. It was still nice though and my brother had no complaints, I don't think it lasted long! The pastry actually came out very well too when it wasn't rolled too thin trying to line a tart ring a size too big.

The Book Cooked
Level of expertise required: At the start of each recipe there is a difficulty rating from one to three chocolate blocks, this was a two chocolate block difficulty level recipe. But some of the ratings seem a little off, for instance a concorde covered in hundreds of meringue tubes has only a one chocolate block rating... Then there are recipes that need a four chocolate block rating in my opinion. I'd say the book mostly is comprised of one chocolate block recipes though and I'd agree with most of the difficulty ratings.
How many trips to the supermarket required? Only one. Hurray! I did start to wonder if I was going to have to find pecans elsewhere having tried searched through all the nuts in the nut section of the supermarket, but I remembered they hide nuts throughout the store like woodland creatures and there is the other nut section by the baking ingredients... Anyway, yes most of the ingredients should be easy enough to find and I seem to have picked one of the few recipes that required special equipment. But if you want to do the fancy tart cases from tart rings you might have to order them online.
How closely did your dishes resemble those in the book? I think had I found that pesky 25cm tart ring it would've been very close and I don't think my final tart was that far off. However there are some of the 3 chocolate block rated recipes that I think would be much harder to pull off, but that's why they're three-block-rated recipes.
Ease of reading: I think it's fairly well written, the instructions a clear and straightforward. Some good tips on working with chocolate and making actual chocolates as well as baking with it.
Pretty on the coffee table or designed to be battered through overuse? I guess when I think of a cookbook dedicated to chocolate I probably think of the sort of 30 page little gift that you'd get given by someone who knows you like to bake but doesn't really understand what you're after in a recipe book... I know I have a couple of those. While Chocolate covers all of your brownie/cookie/cupcake bases it has a large selection of interesting recipes that maybe you'd never think of... Chocolate Custard Apple Tart anyone? Or Chocolate Pecan Pie for that matter. That being said, I think it'd most likely find a place on the coffee table being pretty for me.