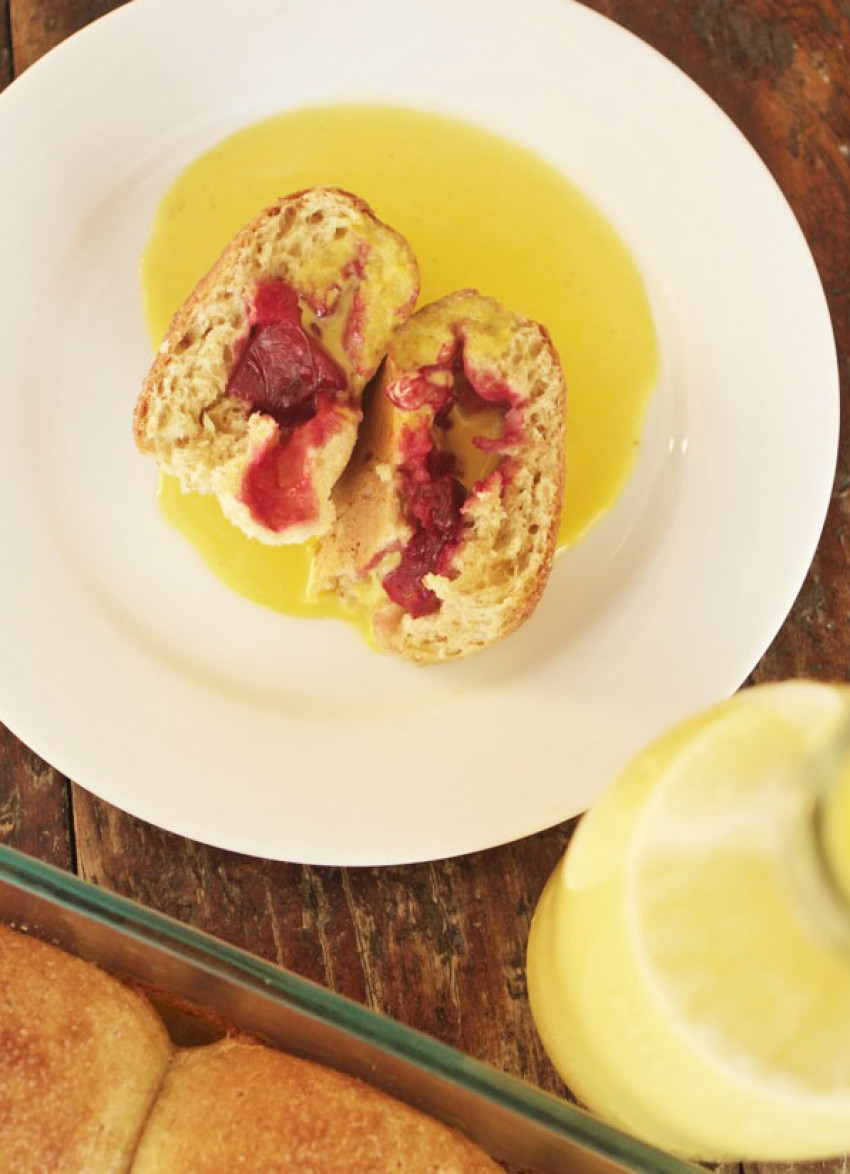 David Parker tests the plum buns from Cornersmith: recipes from the cafe and picklery (if anyone knows where one can find a "sugar plum", please drop us a line...)

Cornersmith is a Sydney cafe and they also run a "picklery". A picklery, apparently, is just what it sounds like it would be; a shop that makes and sells pickles of all varieties. Not really something I'd imagine being a commercial success but apparently it is – after all pickling is very hip right now. So much so that I'm in the middle of making kimchi (not technically a pickle but bear with me) from a pickling book and I still have pickled cabbage in the fridge from testing Supernormal and I just picked up three cookbooks to review with a fair bit of pickling in each. Everyone is doing it. According to the book, Cornersmith started as just a cafe that served pickles, then they decided to see if people wanted to trade home-grown produce for coffee or pickles. They soon became overwhelmed with a wealth of locally grown citrus fruit, chillis, figs, basil and rosemary. They decided to expand to run both the cafe and a stand-alone picklery which would also run classes on pickling, cheese-making and fermenting. And now they have a book too.

I decided not to pickle anything from Cornersmith as I have a fair few pickles in the fridge at the moment. The book is split into the four seasons and while I was aiming for the "Winter" section I couldn't really go past the plum buns with custard from the “Autumn” section.

First on my shopping list was sugar plums. I actually had no idea that sugar plums were a real thing, I thought it was just the name of a fairy in the Nutcracker. After about two or three shops I discovered plums were in short supply and mostly unnamed (my own fault for wanting a plum in winter...). Although after a little Googling it would seem we don't get "sugar plums" here in New Zealand. At this point I probably should've cooked something else but there was a big box of plums at the supermarket and someone was going to have to eat them and damn it why should that person not be me? So I took a chance on some unnamed plums and started dreaming of hot plums in soft pillows of bread.

To make the buns, I mixed together wholemeal flour, plain flour, yeast, sugar and a pinch of salt. Then I added softened butter, a couple of eggs and all of the milk... I have this bad habit of just looking straight back up to the ingredients in a book to see how much to add even when in plain English it says “and 250ml of the milk” in the recipe. So instead of the 250ml of milk I added 300ml of milk. Not too much of a difference but enough to have me questioning why my dough was so wet. I added about 50–60 grams of flour to the mix, which made it more dough-like, so after kneading fully I formed the dough into a ball and left it to rise, only realising my minor milk mistake later. We're all human, okay?

After leaving it to rise I knocked back the dough and divided it into 12 portions, weighing them on the scales to make sure they were all even, then left them to rise for 10 minutes. It was at this time I took another look at my plums. They now seemed massive, the biggest plums that had ever existed. How was I supposed to stuff a bun with a whole plum? I went about cutting them up into sections.... it was at this time I tasted a plum. I am glad I did because I immediately winced and my whole face shrivelled up because of their sourness. I tried a couple of other plums and chose the sweetest, after all I wasn't going to need all twelve. Then in a bid to make the plums more edible, I added a sprinkling of sugar to the plum pieces and left them to absorb some of it. I can only assume in-season sugar plums are sweeter than these plums.

I pressed down the buns into little circles and wrapped my plum pieces inside them. I worried that pieces of plum might interact with the dough differently to a whole plum and the liquid from the plum would do strange things to the buns.

But there was nothing I could do now. After filling all the buns I put them into an oven dish and left them to rise again.

When they had finished proving I brushed their tops with a mix of melted butter and milk then sprinkled the tops with a tablespoon of sugar mixed with a teaspoon of cinnamon before putting them into the oven.

With the buns in the oven, I decided to get on with the custard. I put the milk, cream and vanilla bean into a saucepan and brought it to a boil.

While the milk and cream were heating I whisked together sugar and egg yolks. I'm not really sure why I decided to do this with a hand whisk, I guess it's more photogenic. But I was soon wishing I'd used an electric whisk for this. Just when my arm was about ready to fall off I decided the yolks were now light and thick enough to add the cream and milk which had just come to a boil.

I haven't really made custard this way before so I cautiously added the cream and milk a splash at a time while whisking. When it was fully incorporated I put the bowl over a saucepan with boiling water and began stirring it with a spoon to thicken it. The book says if you're feeling more confident, to just put the custard straight into a saucepan but I wasn't feeling confident... However, I think I should've used the saucepan because it didn't really thicken up properly but I couldn't wait any longer, the buns were done and I wanted to eat.

Finally, I teared into one of the buns, blew on the steaming plum centre before foolishly taking my first bite without custard. Did I mention the plums were tart? Because they were very tart. Fortunately, the custard was almost too sweet and helped balance out the plums – in the end it was a really nice combo. The buns were a thick, doughy consistency, not really a brioche but almost. I thought the wholemeal was an interesting addition, gave them a nutty flavour and made them feel slightly more wholesome. It was a little strange having essentially bread and custard as a pudding, almost like a bread pudding actually but really nice. I'd bake these again, I imagine they'd work well with stewed apple or pears or whatever filling you like.