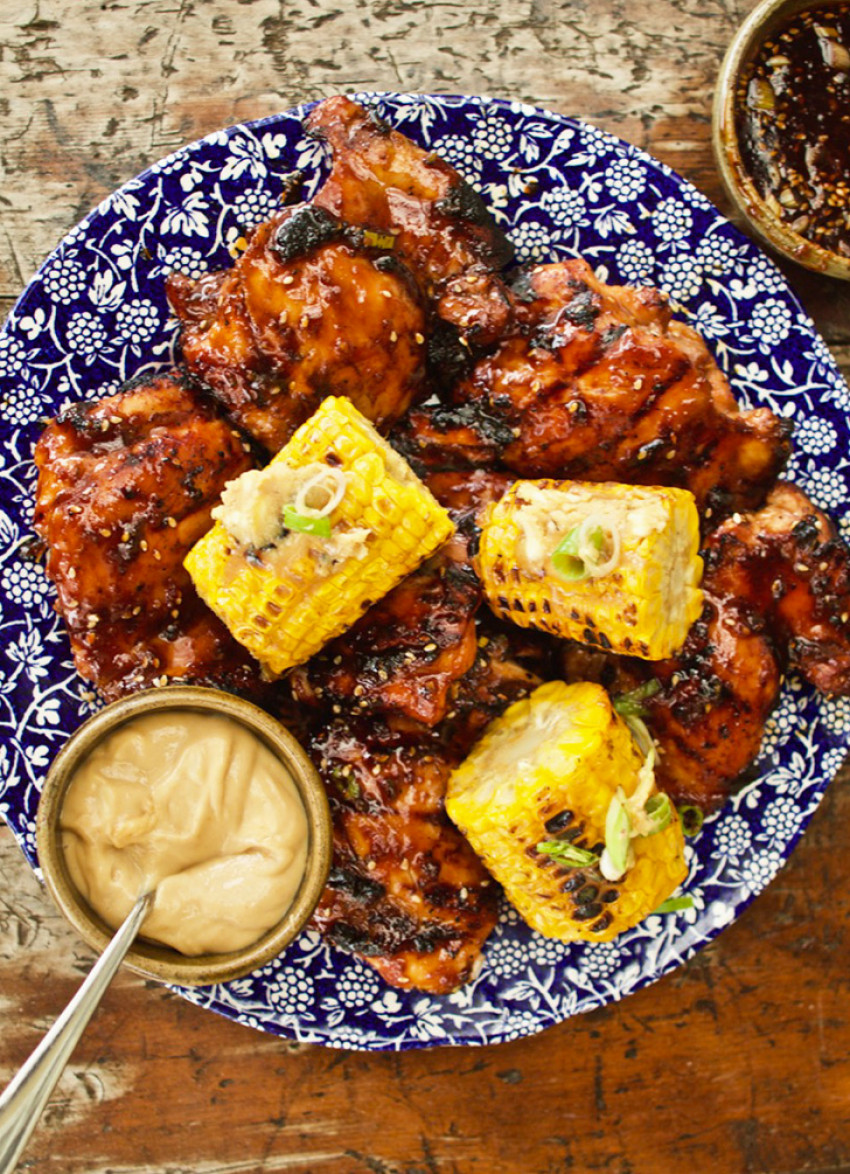 Chef and author Judy Joo describes herself as a French-trained Korean American Londoner, which should maybe give you a hint that Korean Food Made Simple isn't going to be 100 per cent authentic Korean recipes.

Think Korean-influenced recipes. You can see the other logical influences shining through in dishes like Korean Fish and Chips, Korean burgers, Korean pulled-pork quesadillas and a Kimchi and Bacon Brioche, among many others.

After quitting her fancy job on Wall Street to pursue a career in food, Judy studied at a French culinary institute in New York, working various jobs in the industry before becoming an Iron Chef in the UK, hosting her very own TV show, Korean Food Made Simple, and opening a restaurant Jinjuu in London and Hong Kong.

First, I made the marinade for the chicken by mixing soy sauce, brown sugar, thinly sliced spring onions, rice vinegar, maple syrup, gochujang (Korean chilli paste), sesame seeds, garlic, salt and pepper. I split a portion of the shiny black marinade off into a bowl to be served as a dipping sauce later. To the remainder, I added the chicken thighs and made sure they were well coated before leaving in the fridge to marinade for about 4 hours.

I put the marinade I had kept aside in a saucepan, brought it to a boil and let it simmer for about 10 minutes to thicken up.

After enough time had passed I cooked the chicken and the corn on the barbecue. I always find it a little nerve-wracking cooking chicken on the barbecue because you don't want over-done dry chicken, and you really don't want under-done chicken. When I thought they looked done, I picked one of the fatter thighs and poked it with a knife to have a check inside. Once convinced, I pulled the chicken off the grill.

After the sweetcorn was cooked I spread the cobs with the doenjang butter and served the chicken with a side dish of the doenjang mayonnaise and the now-thickened barbecue sauce for dipping.

To be honest, I was a little surprised at how simple this had been, I picked a recipe that had a couple of extra pages to turn to for the additional components but it turned out to all be more simple than I had initially thought. Fortunately, it didn't taste that way, the chicken was delicious, sweet, salty and spicy. Plus, thankfully, it was cooked all the way through but still juicy and tender. The doenjang mayonnaise was a great addition, helping to calm down some of the spice elements of the chicken while bringing another layer of salty umami. Plus, who could go wrong with grilled sweetcorn?

The fresh spring onions in the doenjang butter gave the dish a little oniony kick. Even my slightly unadventurous, slightly dubious siblings enjoyed this one.

The Book Cooked
Level of expertise required: It's in the title; Korean Food Made Simple and I'd say that they have succeeded in a collection of fairly simple recipes, not so simple as to be condescending to the reader; recipes for bread and other baking. But certainly not intimidating for those wanting to give some Korean flavours a try.
How many trips to the supermarket required? While I find most supermarkets have a pretty good range of some Japanese and Chinese staple ingredients, they are lacking in Korean foods. You'll probably have to visit an Asian grocers, but other than the gochujang (Korean chilli paste) and the doenjang (Korean fermented soybean paste) I managed to pick everything else up in a regular supermarket.
Pretty on the coffee table or designed to be battered through overuse? I think if you're interested in inserting some Korean flavours into your cooking, or you want inspiration for more places to put kimchi or you just want to try and cook some regular simple Korean food you're going to find good use for this book in the kitchen, if you're not interested in any of the above then I guess you probably shouldn't buy this book because it does what it says in the title –Korean Food Made Simple.