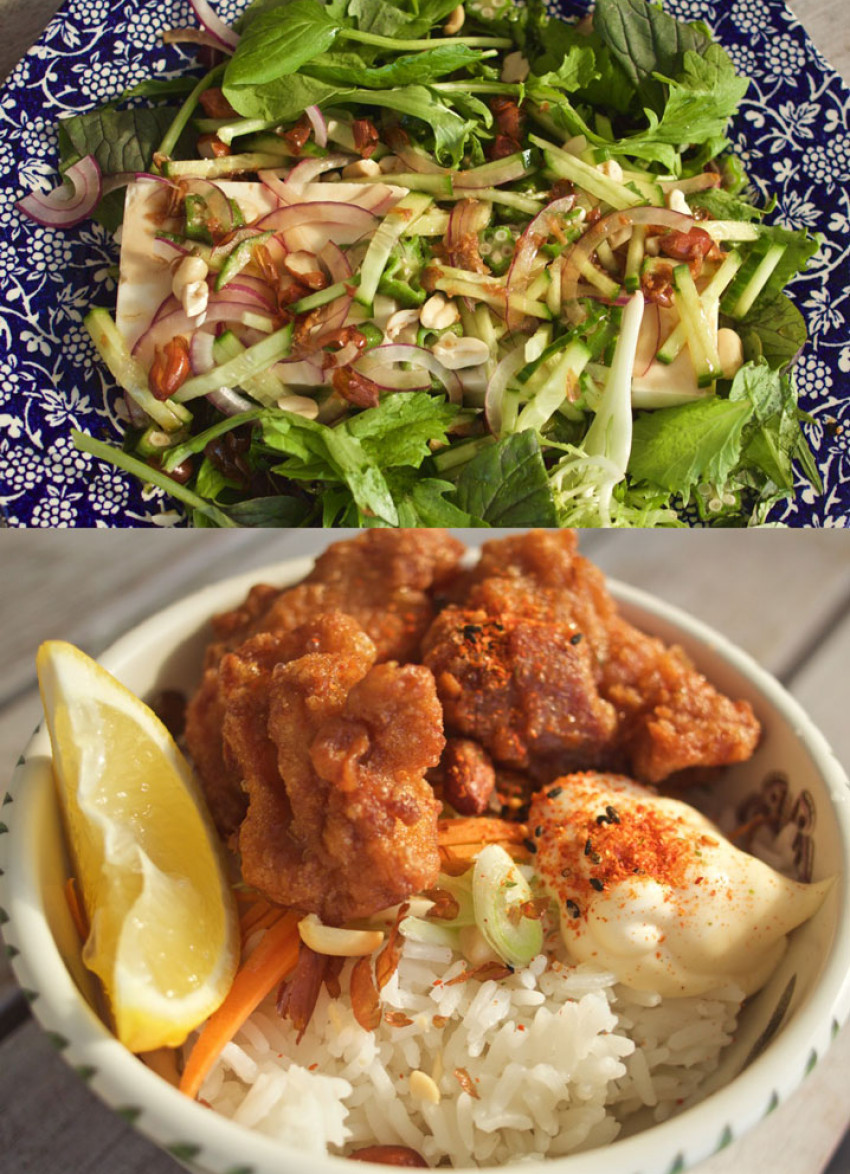 Maori Murota grew up in Tokyo but now lives in France and having taught herself to cook in 2009 she left a career as a stylist and landed jobs in Parisian restaurants Düo and Bento at La Conserverie. Nowadays she is an event caterer, private chef and gives lessons in authentic Japanese cooking. She also wrote this book! Inspired by a general lack of knowledge of everyday Japanese food in France she wrote it to educate people on cooking Japanese food at home as well as Japanese food culture more generally.

While I know there’s more to Japanese food than sushi, I've never actually tried cooking any Japanese food at home. Although, with Ken Yakatori, Renkon, Tanuki’s Cave and a plethora of other great Japanese places in Auckland I haven't felt the need. But looking through Tokyo Cult Recipes I felt excited to take the plunge and chose to test one of my regular favorites; Karaage Chicken. But as the recipe was so simple I chose to add another, something I don't think I've ever tried before – a Tofu Salad.

I started the Karaage Chicken first as the chicken needed to marinate for a while. I mixed the ingredients of the marinade (which also becomes the batter) together. I thought I'd have a real problem sourcing the potato starch but I managed to find it pretty easily in a local Asian supermarket. They had all sorts of other interesting starches too. It's amazing how you have no idea these ingredients exist until you need one.

With the marinade mixed together I cut chicken thighs into 4cm pieces and left them to marinate in the fridge.

When I couldn't wait for Karaage Chicken any longer I started heating about five centimetres of rice bran oil in a saucepan. We do have an actual deep-frier but it's so cumbersome to get out and I thought I might as well try this method.

While it was heating I got some rice cooking and got on with the tofu salad, first mixing together the dressing ingredients. I sliced the cucumber into thin matchsticks and thinly sliced the red onion. Next I blanched the okra pods in boiling water – I’d never tried this vegetable before.

I arranged some mesclun and rocket on a plate, sliced the tofu in half and placed it in the centre and topped it with the okra, cucumber, onion, dressing and some chopped peanuts. 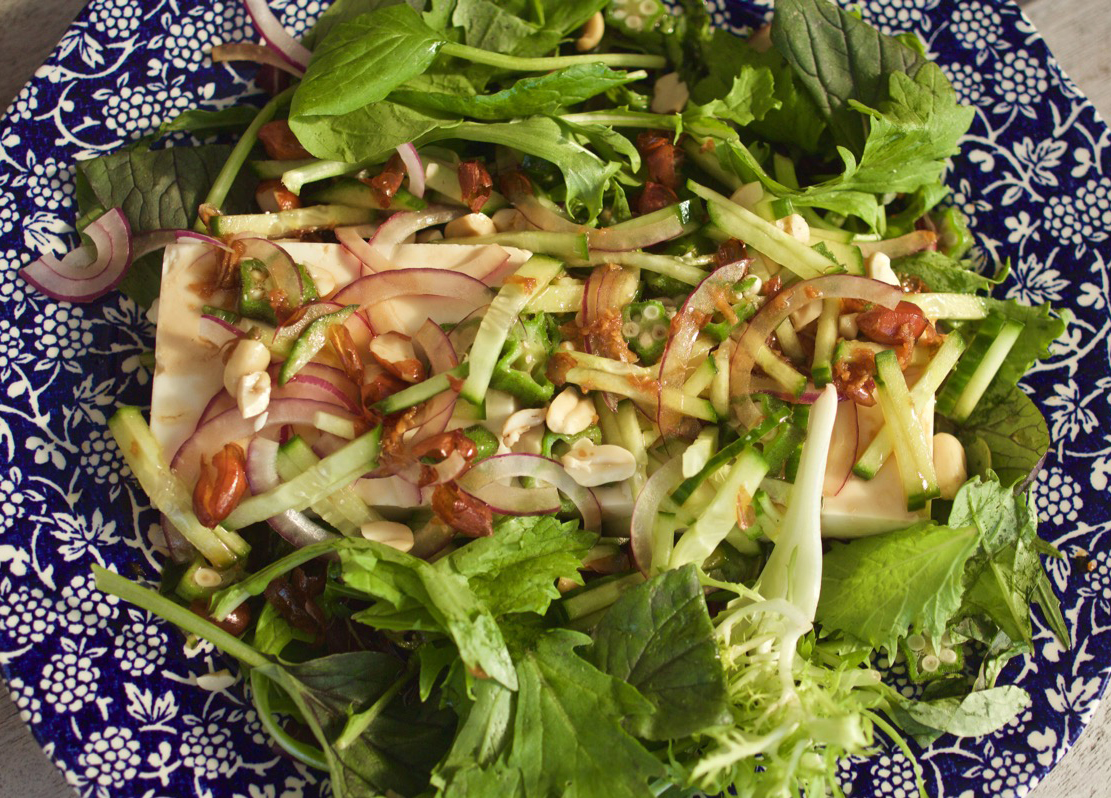 I fried the chicken in a couple of little batches. It was actually really easy. I've always been put off deep-frying, with all the bowls of egg and flour and breadcrumbs needed to dip things in, but this was ridiculously easy.

I served the Karaage Chicken with wedges of lemon and some Kewpie mayonnaise. That stuff is white gold. You can pick it up in the international aisle of most supermarkets. I don't know what makes it so good but it's amazing, trust me. I also served it with shichimi – a Japanese blend of spices, predominantly chilli.

The chicken was great. Crisp on the outside, juicy and tender on the inside. I thought the teaspoon of cinnamon in the batter would overpower all the flavours and make it taste like some sort of weird chicken gingerbread but it didn't, you couldn't really pick the cinnamon out. It just tasted like Karaage Chicken. Someone else commented that the batter tasted “kind of like those thin strips you find in bhuja mix without the bhuja flavouring”.

The salad had mixed reviews. I really liked it, the dressing was great, the sesame oil shone through and gave the salad a nice nutty flavour (yes I know sesame is a seed not a nut!). Despite enjoying the salad those less familiar with tofu weren't so keen on it, but I'm a fan of tofu so I enjoyed it. I didn't enjoy the okra though. They were so slimy and soft and didn't really taste of anything. If I was making it again I wouldn't bother with the okra. The Book Cooked
Level of expertise required: There is a range of techniques covered, from sushi to soups, but I don't think you should be intimidated by it. I think the point of the book is making Japanese cooking accessible and so it doesn't go too technical. Although my workmate did turn his nose up at a page dedicated to a recipe for cooking edamame which was essentially: “Buy frozen edamame, boil in water for the time specified on the packaging, sprinkle with a pinch or two of salt”. But maybe you've never heard of edamame before and have no idea how great they are.

How many trips to the supermarket required? Two, there are a few specialty ingredients that should be relatively easy to find in a good Asian supermarket, if not the international aisle of most supermarkets.

How closely did dishes resemble those in the book? I'd give the Karaage Chicken 10/10. But the tofu salad maybe an 8/10. Both should be pretty easy to recreate, there isn't much fancy plating here, although I didn't attempt the sushi or bento boxes.
Ease of reading: 8/10 the recipes are pretty short and straightforward. I liked the little hand-drawn pictures.
Pretty on the coffee table or designed to be battered through overuse? Hopefully this will be battered, it deserves to be. I think it's a good intro to Japanese cooking and probably fairly attainable to use in everyday cooking.