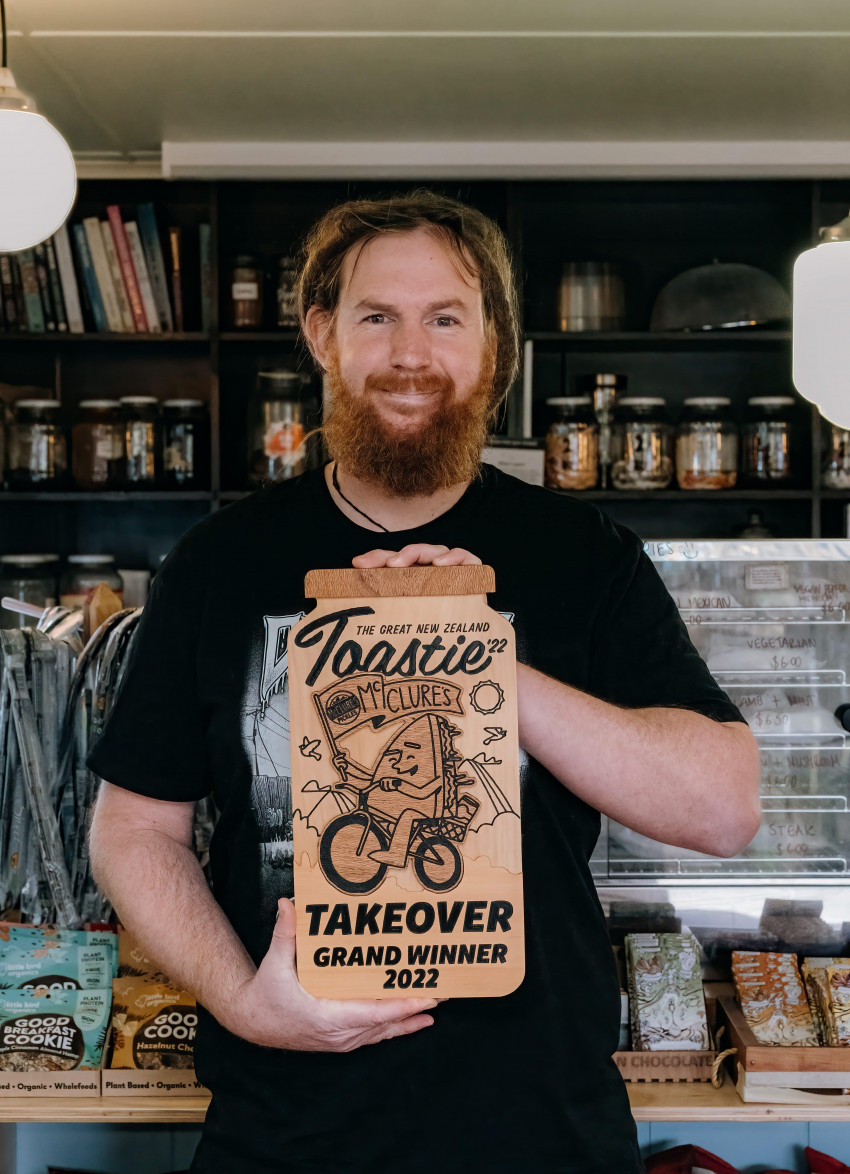 Chef Rich Johns from Rotorua’s Okere Falls Store and Craft Beer Garden has won the hotly contested title – and brought an end to the South Island’s three-year winning streak in the competition – with his ‘Get Smoked, Pickled + Toasted’ creation.

Johns, who has worked at the Okere Falls Store café for the past six years, entered the Great New Zealand Toastie Takeover last year and just missed out on making the finalist round. Undeterred, he returned for another attempt, proving that second time can also be the charm.

Johns was so determined to use brisket in his toasted sandwich entry, he convinced the café’s owner to purchase a smoker. The brisket was brined in a house lager from local brewer Lumberjack Brewing, then spritzed with McClure’s pickle brine and smoked for 24 hours on site using a special rub.

A former wedding photographer with a deep passion for food and flavour, Johns switched careers when he decided photography took him away from his young family too often. He started working as a barista at Okere Falls Store, and after displaying an interest in menu development, moved to the kitchen, where he eventually became head chef.

“It’s still sinking in, but it’s a huge honour,” he says. “It reinforces the love and care we put into the creations at Okere Falls - we get lots of compliments from our diners on the food. 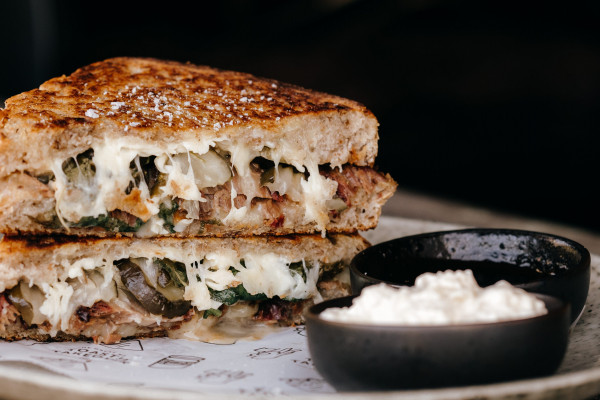 “We don’t have a traditional menu and try to be a little different, so to win this shows it’s paying off and it’s so amazing to be rewarded. We’ve had so many rave reviews about the toastie and to win, it means a lot.”

The previous three winners of the Great New Zealand Toastie Takeover were all from the South Island - Steve MacDougall from Mollies (Hotel d’Urville, Blenheim) in 2021, Romeo Dowling-Mitchell from Dunedin’s Hungry Hobos in 2020, and Joseph Walker from the Hokitika Sandwich Company in 2019.

The competition’s head judge, Kerry Tyack, says this year’s winner was highly innovative in using both the familiar and readily available.

“The Okere Falls Store is a craft beer café, and it was great to see they maxed out the influence of craft brewing - for example, using hop-salted mozzarella, beer-soaked brisket, and artisan sourdough bread made from spent brewing grains,” he says.

“We also enjoyed the nod to wild food via the use of watercress, while using the pickles as a palate-cleansing element was inspired. Their juice lifted the sour cream to a pickle and dill inspired high.

“The entry also delivered epic mouthfeel and both complementary and contrasting flavours. No ingredient was superfluous, we gave it a perfect score for taste.

“We should also mention the inclusion of a brief note explaining the brewing philosophy behind the main ingredients. It tied everything together perfectly.” 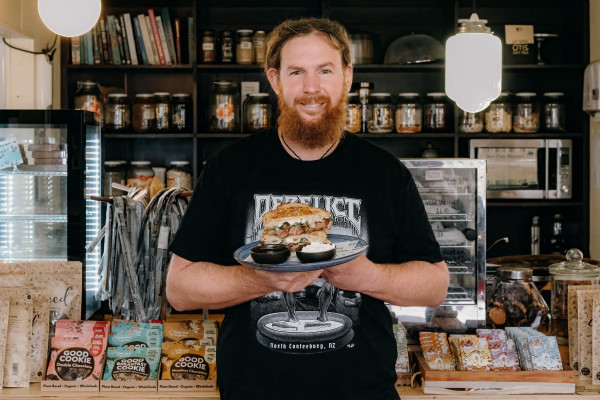 McClure’s Pickles co-founder Joe McClure says while the quest to find Aotearoa’s tastiest toastie may be over for another year, it’s clear the Kiwi love affair with the toasted sandwich is as strong as ever.

“This has been another watershed year for the Great New Zealand Toastie Takeover, one in which the judges were given the mammoth task of choosing a winner, while the entrants had to manoeuvre through the unique trading challenges thrown up by Covid-19,” he says.

“But everyone made the necessary adjustments in typically innovative ways, and we’ve had another hugely exciting competition.”

This fifth year of the popular competition saw more than 140,000 toasties served up to customers across the more than 180 eateries vying for the title.

The Great New Zealand Toastie Takeover competition criteria required sandwiches to be toasted between two slices of bread and able to be eaten by hand. The toasties also needed to contain cheese and McClure’s pickles, with all the other ingredients entirely up to the entrant’s imagination.

Thirteen finalists were selected from the 180 entrants and were all judged on the same criteria, including presentation, effectiveness of preparation technique, eatability, taste, innovation, and originality.

Rich Johns and Okere Falls Store can now claim to the top toastie award by way of a bespoke Rikki Berger* trophy, a year’s worth of McClure’s Pickles, and $500 in vouchers to give away to customers. The winning toasted sandwich remains on their menu seven days a week (from 10am – 4pm) until the end of August – and potentially beyond!

For more information about the Great New Zealand Toastie Takeover, check out www.toastietakeover.com

*The trophy, made in 3D resembles a jar of pickles with a pickle riding a bike and flying a McClure’s flag – duplicating the branding created for this year’s campaign. The 3D plaque / trophy hand painted, hand assembled, and all made from recycled timber with a base layer of kauri, the toastie and lid made from rewarewa and the base, from matai.