We talked to Former Silver Fern and TVNZ Breakfast co-presenter Jenny-May Clarkson about family dinners, her favourite eateries and those early, early starts then created a recipe especially for her: ‘Chicken Risotto’ Tray Bake.

Former Silver Fern and TVNZ Breakfast co-presenter Jenny-May Clarkson is a self-described “simple chick”. The youngest of six kids, she was raised in the King Country town of Piopio, where she lived just down from the marae and her parents ran the local takeaway shop. Fancy cuisine wasn’t a part of her upbringing, but sharing food with friends and whānau – so central to manaakitanga (the Māori concept of hospitality) – has always been an important part of life.

Jenny-May’s high-flying career as a Silver Fern, and later sports presenter, has taken her to plenty of exotic cities around the world, but none of that has changed the fact that she’d rather break bread with a loved one than eat in a fine dining restaurant. Here, the mother of twin boys and teen stepdaughters reveals some of her favourite local spots and food memories, as well as tricks for ensuring there’s always enough to go around.

dish: You’ve got a busy career and twin four-year-old boys at home, what do weeknight meals at your place look like?
Jenny: My mother and father-in-law live with us as well, and every second week my husband’s teenage daughters are with us, so one week we have six to cook for and the next we have eight. My husband and I share the cooking quite a bit, and we do Bargain Box three days a week, so that relieves a lot of the stress. The other days we make it up with what we’ve got left over.

What are some go-to meals you like to cook for the family?
All the whānau love my mince pie. I just throw carrots, frozen corn and seasoning in with the mince and put a combination of kumara and mashed potatoes with cheese and breadcrumbs on top. With so many people to feed we do a lot of filling out with things like vegetables and rice. We’ve also been growing our own tomatoes in the garden and making big salads with those.

Are there any favourite food memories from childhood that have stuck with you?
One thing I remember is my mum’s scrambled eggs. She used to put a can of sweetcorn in them and they were always a treat. We never got it very often, but when we did it was every man for himself. You can imagine six kids trying to fight over a pan of scrambled eggs and creamed corn. I’ve tried to make it myself but it was s*** – nobody can cook it like my mum.

What are some of your favourite places to eat out?
We don’t get out much because we have a very busy household and it’s expensive, but I live in Clevedon so when I do go out, it’s local. We’ve got Hallertau, which the boys love because there’s an outdoor area where they can run around, and they love the pizza.

Our other favourite is an Indian restaurant in Papakura called Punjab Palace. They’re such beautiful people, they always ask my husband, “Dean! How’s the family?” So that’s part of the reason we go, but we also love their butter chicken.

Do you like to entertain at home? If so, what’s your style?
We’re quite a communal home, family and friends come to us. We do a lot of barbecues and salads, new potatoes with butter, really simple stuff. I will always make more than required, because that’s just how I’ve grown up. The concept for Māori is manaakitanga. When people come to your home you always make sure you’re offering a cup of tea or whatever you have, even if it’s not much, so you can make sure that person feels welcome. I would hate for somebody to leave my home and still be hungry.

Do you have any favourite treat foods?
I’m not a massive dessert person but I do love chocolate, and my sister-in-law used to make a self-saucing pudding that was ridiculously good. I also love pizza.

You must get up super early to film Breakfast. When do you eat your first meal of the day and what is it?
I get up at 2am most mornings. I drink water on my way to work, then when I get to work I drink more water with a packet of ketones. I don’t do the keto diet, but it just helps with my hunger and energy levels until I get home. My first meal is usually when I get home at around 11am and I might have something like bacon and eggs on Vogel's bread to eat.

Any favourite drinks?
Hallertau No. 2 Pale Ale, which I discovered when I had a one-on-one date with my son at the brewery recently. He had juice and I had a beer. How terrible is that?

If we could teleport you to any restaurant in the world for dinner tonight, what would it be?
I’m a pretty simple chick. If you took me to a flash restaurant I’d probably ask, “What is this?”. But on the weekend I went home to Piopio, which is a very small town, and caught up with a friend for a drink at a place called The Night Owl. I ordered fish and chips to take home to mum who was waiting for me. She’d made a salad out of stuff she grows in her garden, and we just had the best dinner I’d had in ages. So much of a good meal is about the company you’re with. I hadn’t been able to just sit quietly with my mum in years, and that was part of why it felt so good. To me, that’s the definition of soul food.

Recipe by Sarah Tuck
From issue #96

This recipe was created by Sarah Tuck for Jenny-May Clarkson: Jenny-May has a lovely, honest approach to her cooking and the needs of her whānau. Here I wanted to provide a recipe with extended family in mind. This one is a blend of chicken pie and risotto, which is delicious and can be changed up to suit. Leeks and carrots can be swapped for kūmara, lentils or cannellini beans can replace rice and the chicken can be swapped with sausages, adding bacon, mushrooms, green beans or tins of cherry tomatoes. 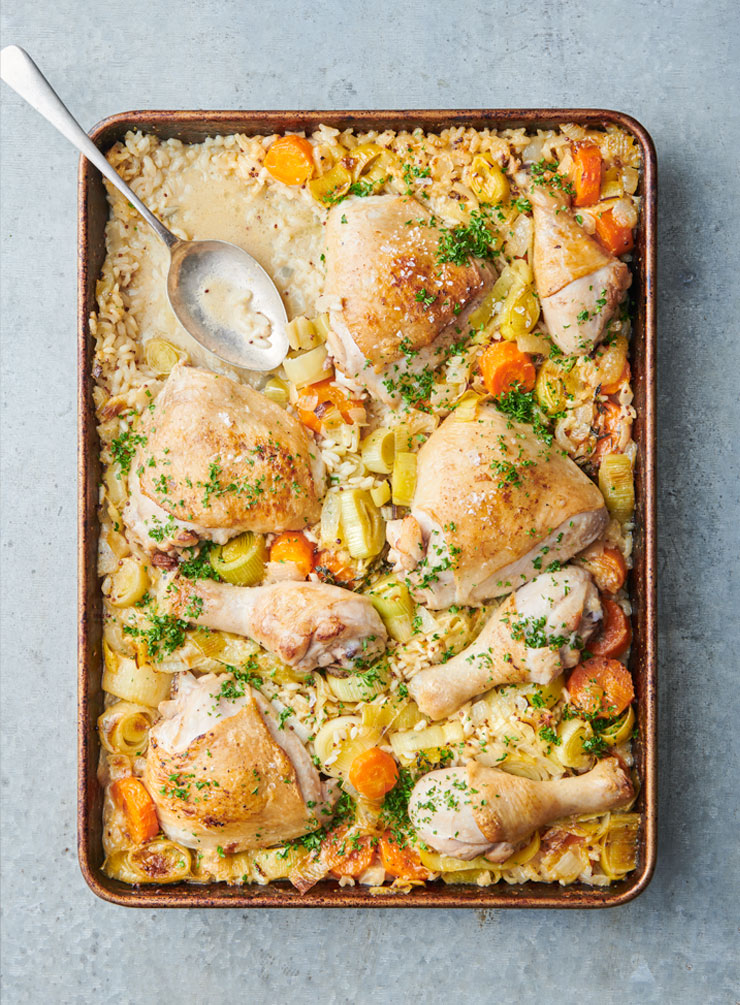 Heat the oil in a large sauté pan and brown the chicken on all sides. Remove the chicken from the pan and set aside.

Melt the butter in the unwashed pan. Add the onion, carrots, leeks, garlic, and thyme to the pan with a good pinch of salt and cook for 5 minutes. Stir in the rice, stock, cream and mustard. Season and bring to the boil. Tip the mixture into a large roasting dish or other ovenproof dish and nestle in the chicken. Cover with foil and cook for 20 minutes. Uncover and bake for a further 10-15 minutes until the chicken is fully cooked. Top with parsley before serving.