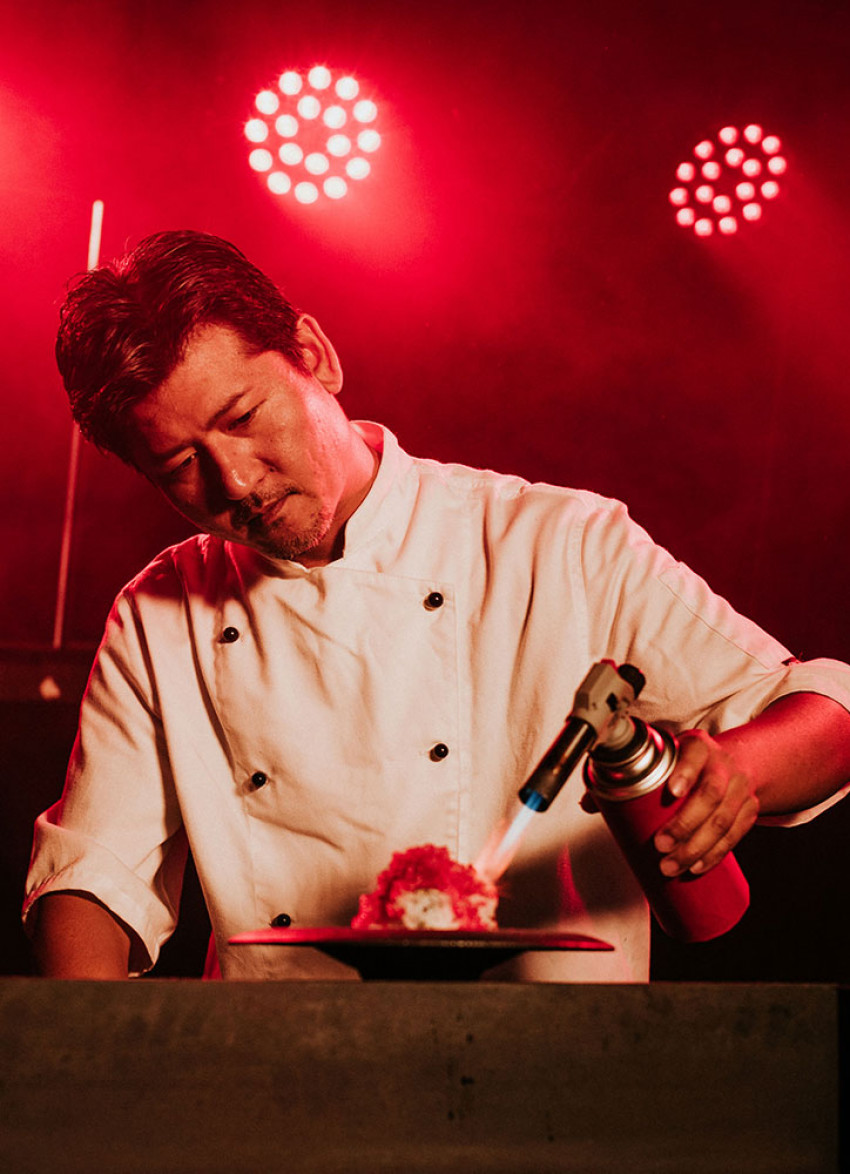 Digital Editor Isabeau Brimeau headed to an R-rated K Road location for a night of food, cocktails and debauchery.

My unusual evening started with a string of text messages from my friend, Cathy. “I think I’m here?”, “Oh my god, is it a strip club?”, “Izzy, where have you taken me?!”. I jumped out of the Uber and lo and behold we were standing outside Club Vegas, a strip club.

Tittering, we opened the door and climbed the dimly-lit stairs. Thankfully, we had arrived at the right place and not a still-in-use strip club. The walls were red velvet, the strip lighting on the roof basked the room in red and the tables were set facing a small stage – ready for a show.

We were shown to our table and promptly given a complimentary glass of Asahi. The menu clarified that we would go on an eight-course culinary adventure, courtesy of Azabu’s head chef Yukio Ozeki. But that wasn’t all – the strip lighting was part of a light installation, created by artist Angus Muir. As a result, different colours and effects occurred throughout the night, each one designed to match the food. 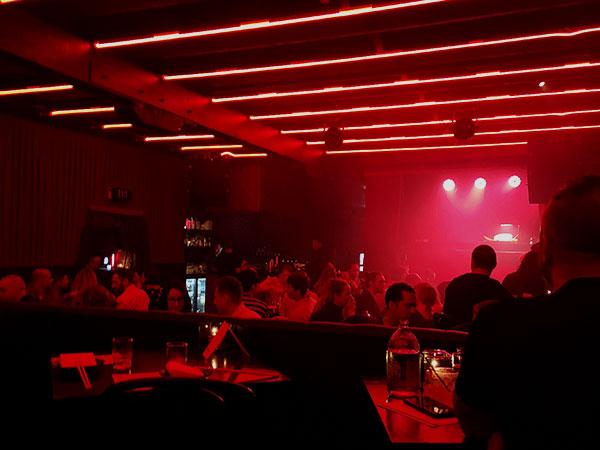 We began the evening with Yukio Potion No.5 – a cup filled with a thin shiitake mushroom soup. A skewer with pieces of chicken thigh was immersed in the Sichuan pepper-laced broth. It was warming, interesting and full of flavour. This was paired with deep red lighting. 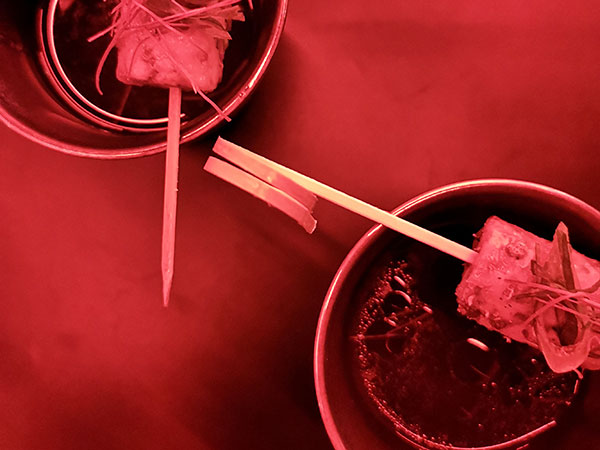 The second course was the signature Wonton Bombs – scallop ceviche and beef tataki on crispy tostadas. Nestled between the two ‘wontons’ was a shot of Sanshimai sake, this had been brewed exclusively for AKAI DOA. The order was then explained – scallop, sake, beef. It was punchy, fresh and enjoyed with bluey-purple lighting. 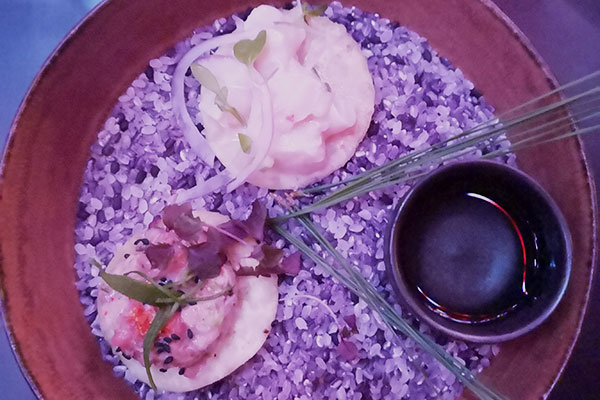 Between courses, the aforementioned stage was taken by Yukio Ozeki. Here, he skilfully carved and sliced away at a large piece of Wagyu beef. The stage wasn’t the only place where performance was underway. An incredibly talented balloon artist circled the floor, asking tables if they’d like something made from balloons. You could pick something to wear or a figure. Rude or ‘clean’. Male or female. We witnessed wearable angel wings complete with a halo, a hat with tentacles sporting eyeballs and our very own lady of the night. 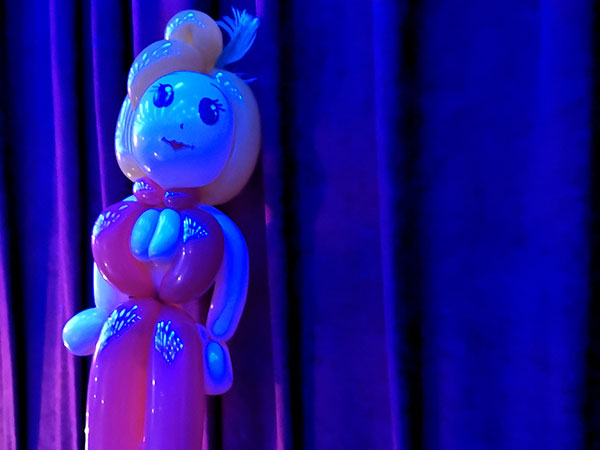 A memorable mention goes to Lil Emerald Pockets, also known as juicy, rich duck and artichoke dumplings on a bed of tangy Tallerines Verde. Ambience came in the form of forest green lighting. 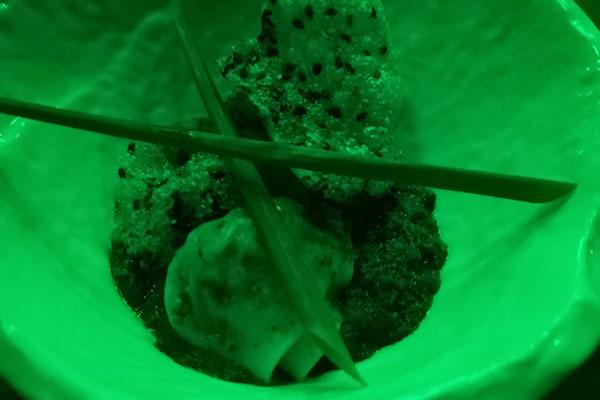 And another memorable mention to A Trio of Temptation. In layman's terms, a trio of nigiri featuring seared salmon, prawn and wagyu beef. Each was perfectly cooked and the lights for this course were maroon. 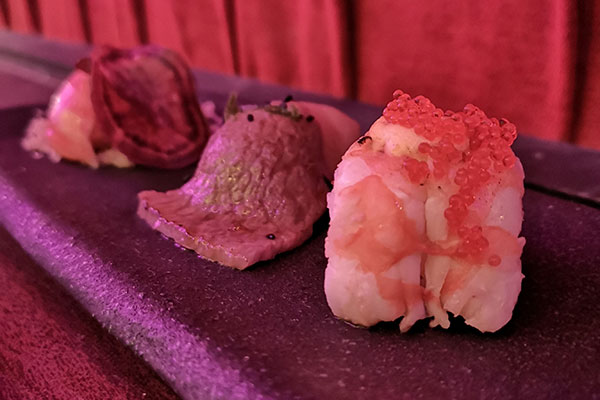 Sadly, we missed dessert – the perils of living in/catching the train to Pukekohe. Driving was off the cards after the assortment of slap-you-in-the-face (in a good way) cocktails. But the combination of soy ice cream, almond crumble, waffle and burnt sugar sauce sounded phenomenal. I can only wonder what the lighting effects would have been.

Even without making it to the end of the evening, I would recommend a night at Akai Doa. It’s a pop-up, it’s raunchy, the flavours will awaken your tastebuds and you may even leave with your own lady of the night…

To book tickets to the next AKAI DOA event, visit their website https://asahiakaidoa.co.nz/.