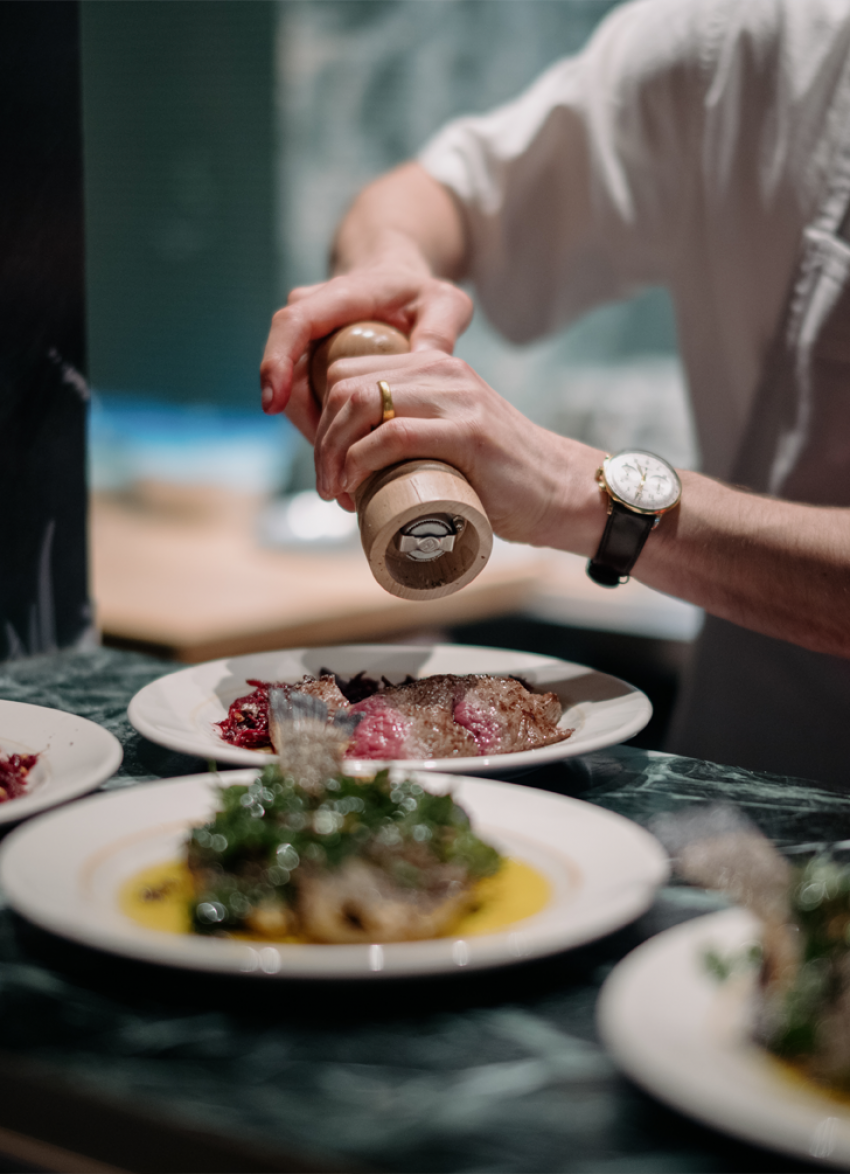 You might recognise Tom Hishon and Josh Helm from Orphans Kitchen and Daily Bread, but their new Britomart venture focuses on seafood and all things seasonal.

There’s a new hotel restaurant in town – one that is a little out of the ordinary. Not only is the hotel in question New Zealand’s very first five-green-star offering, its restaurant is being run by two young talents with a passion for sustainability and two very hip (and successful) brands under their belts. In other words, this is definitely one to check out (even if you haven’t checked in). 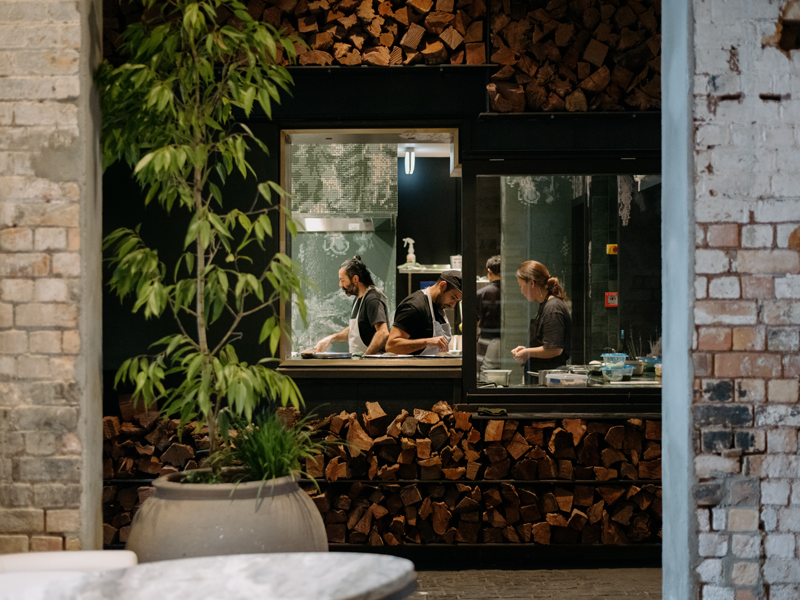 New eatery Kingi is part of The Hotel Britomart in downtown Auckland – just an oyster-shell’s throw from the waterfront. And every adjective that can be lavished on this 99-room edifice can equally apply to Kingi: sustainable, sophisticated, eco-conscious, soulful. Kingi is in the capable hands of Tom Hishon and Josh Helm of Orphans Kitchen fame, the small and friendly Ponsonby restaurant that celebrates New Zealand’s regional produce and whose cuisine has “purity, simplicity and sustainability” at its core. Executive chef Tom and manager Josh are also behind Daily Bread, the popular string of bakeries offering Aucklanders a slice of organic deliciousness. And now, with Kingi – an abbreviation of kingfish – they’re turning their attention to seafood. Though there will be other offerings such as wild venison and a strong focus on seasonal produce.' 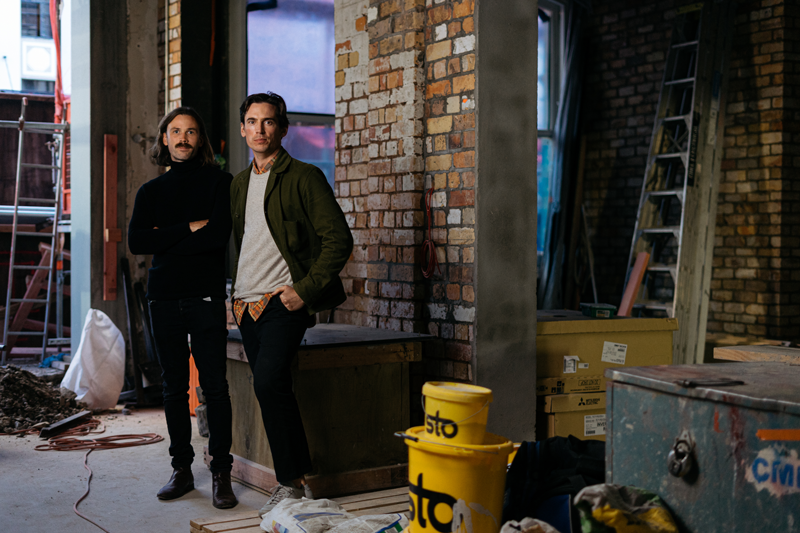 Manager Josh Helm and ​executive chef Tom Hishon in the restaurant before it was finished.

“Through my years at Orphans I always had a love and passion for seafood, and sourcing it sustainably, so it was a natural progression,” says Tom. “Seafood is what I love to eat at home, what I love to cook. I love fishing and scuba diving… it’s a true reflection of New Zealand.”

Like many of his recipes, Tom’s food journey has been organic. “My parents are good cooks, and I was always helping out in the kitchen,” says the Southland born and raised chef. “When I was 10 or 12 my auntie used to send over VHS video recordings of the first Naked Chef TV series. Jamie Oliver’s enthusiasm struck a chord with me. I’ve had a couple of people I’ve looked to in my career: my mum and Jamie. He was never about measurements, it was all freestyling and fun.” 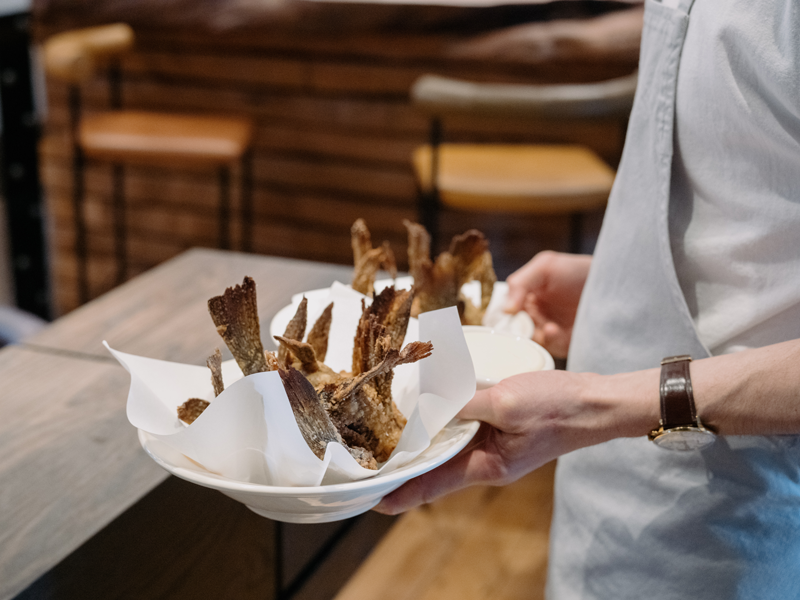 Tom went to cooking school, moved to Auckland in his 20s, went travelling and ended up back in Auckland where, in 2013, he and Josh opened Orphans Kitchen. And while it might seem a big leap – at a turbulent time – from the cosy ambience of Orphans to the full-blown sophistication of a hotel restaurant, much of the philosophy that underpins their first restaurant applies. The style of cooking is something Tom been honing over the years, one of teasing out the nuances of different regional ingredients. Kingi’s menu is chiefly “a celebration of independent fishermen,” says Tom. “They’re using long-lining, fish caught with a hook. Or it’s regenerative shellfish and oyster farming; we’re working with a lot of seaweeds too.”

Tom finds his sources on social media, or through word of mouth. “They’re passionate about what they do. They love being out on the water. We want to talk to that. A lot of these species are endemic to New Zealand; it’s a big part of our history. More importantly, they’re delicious.” Just as the menu reflects our sea and turf, so the venue reflects the heritage of the building – with the Victorian architecture of the former Masonic building elegantly restored. “The setting is beautiful,” says Tom. “Architect Nat Cheshire has done an amazing job of the fit-out, restoring the character of the building. It’s warm and inviting… that’s what we want our food to be like too. In this climate that’s what people are after. To be looked after.” 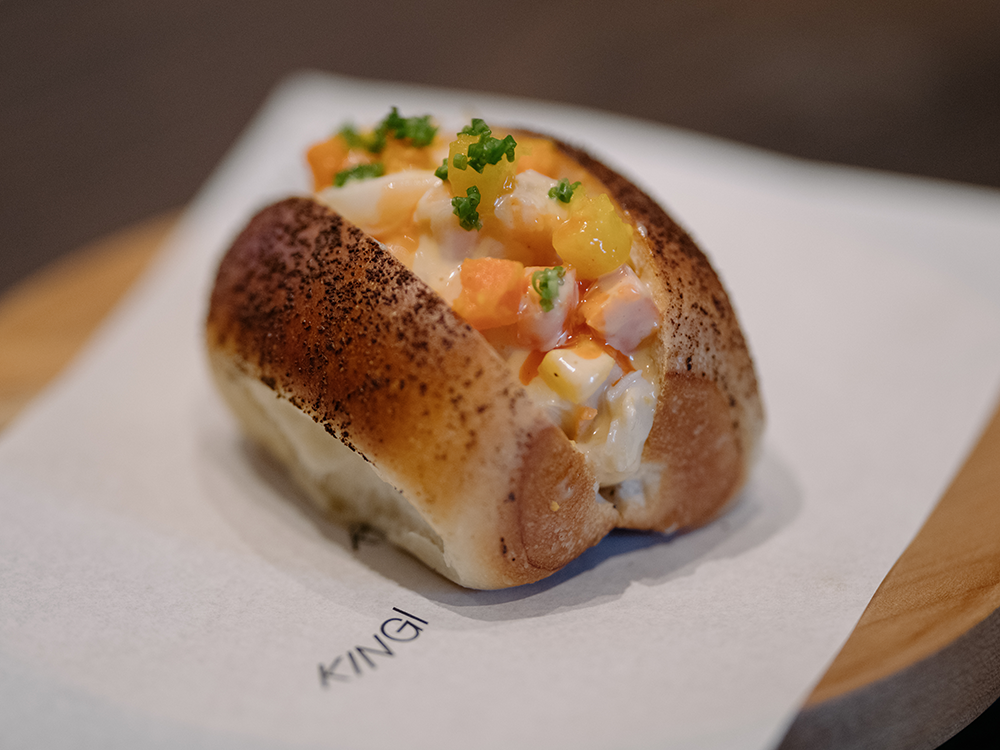 A little laneway – echoes of Melbourne here – runs between Kingi and the hotel’s stunning lobby so Kingi is linked but not swallowed whole by the hotel. It has its own personality, albeit one that complements the hotel’s aesthetic. It’s a restaurant in a neighbourhood, one that bristles with the energy of multiple cafes, dining spots and upscale retailers – rather than a restaurant in a hotel. Inside, there is a nod to the simplicity of Orphans – muted green, brown and beige leather upholstered chairs; the pared-back décor. But a couple of wow features too: a stunning curved timber counter that is one single giant piece of kauri – and a colossal chandelier made of hand-blown pieces of glass, swimming and shimmering in mid-air like the kingfish scales they represent. Then more ocean inspiration in the wall-lights, translucent and blobbily amorphous as jellyfish.

And while it’s all uber-tasteful, Tom and Josh want Kingi to be approachable. To be the sort of venue you can pop into several times a week, to sit down with a wine and a bowl of olives one night, then return later in the week to linger over a meal. And with their first venture having switched to daytimes only, Orphans devotees now have somewhere to adopt them come nightfall.