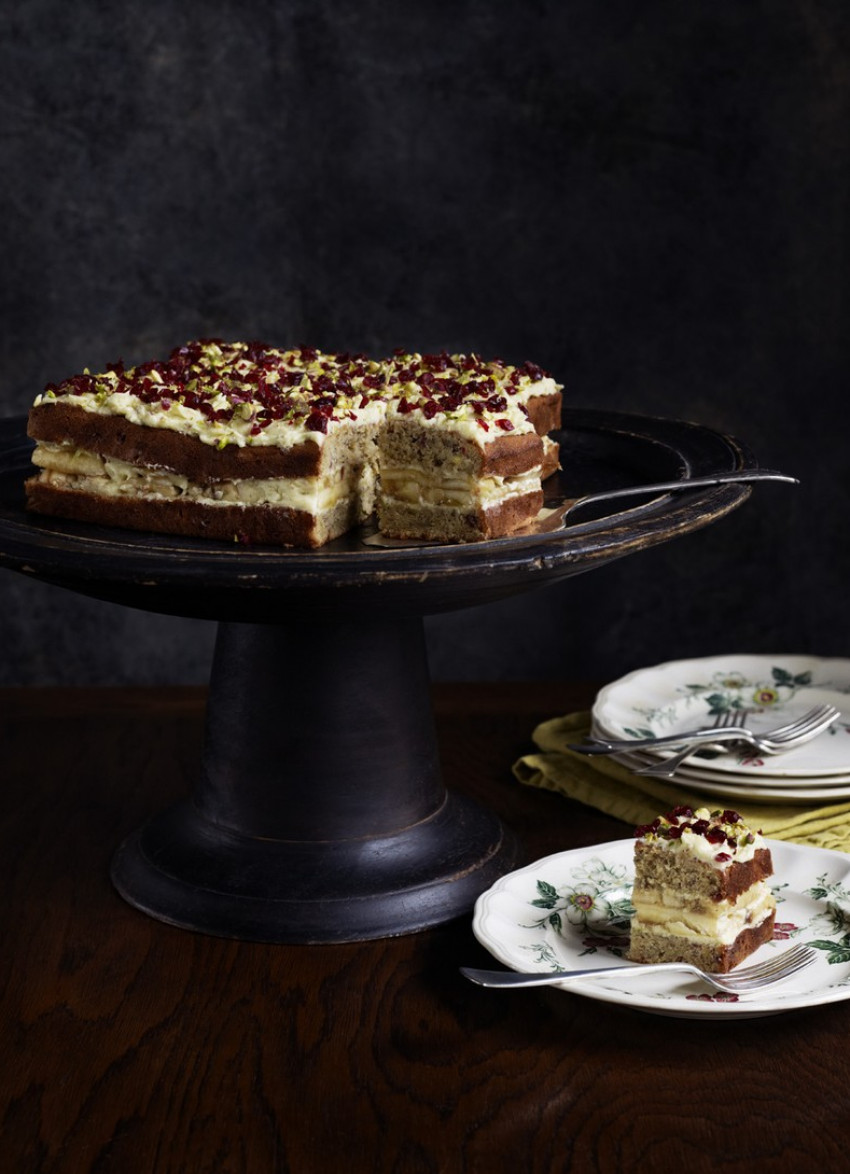 Turn a simple banana cake into a special treat by layering up with this delicious banana cream and topping if off with pistachios and cranberries.

24 cm square cake tin, greased and base and sides lined with baking paper

Cake: Beat the butter and both sugars until light and pale then beat in the egg yolks. Sift the dry ingredients together then toss through the pistachios and cranberries.

Whisk the bananas, lime zest and sour cream together and gently mix into the batter alternating with the dry ingredients. The mixture will be thick.

Beat the egg whites to stiff peaks and, using a large metal spoon, fold a large spoonful into the mixture to loosen it a little. Fold through the remaining egg whites in two lots. Spoon into the tin and smooth the top. Bake for 30 minutes or until the cake is firm and golden and a skewer inserted into the centre comes out clean. Cool the cake in the tin.

Banana cream: Put the bananas, sugar and knob of butter in a sauté pan and cook for 10 minutes, stirring frequently, until it forms a well caramelized and thick paste. Cool.

Beat the butter and cream cheese until light and fluffy then beat in the icing sugar and lime zest and juice. Scrape in the cooled banana paste and beat until well combined.

To assemble: Cut the cake in half. Carefully slide a flat baking sheet between the layers and lift off the top one. Place the bottom half on a serving plate and spread with a third of the banana cream. Slice the bananas and brush both sides with a little lime juice and place them close together to cover the cake. Turn the second piece of cake cut side up and spread with a third of the banana cream. Place on top of the bananas, cream side down. Spread the remaining filling over the top. Toss the pistachios and cranberries together and scatter over the cream.

Cook’s Tip: To split a cake in half evenly, first mark the centre line with a sharp knife all the way around. Then, using a long serrated knife carefully work around and into the cake, turning it to ensure an even cut.