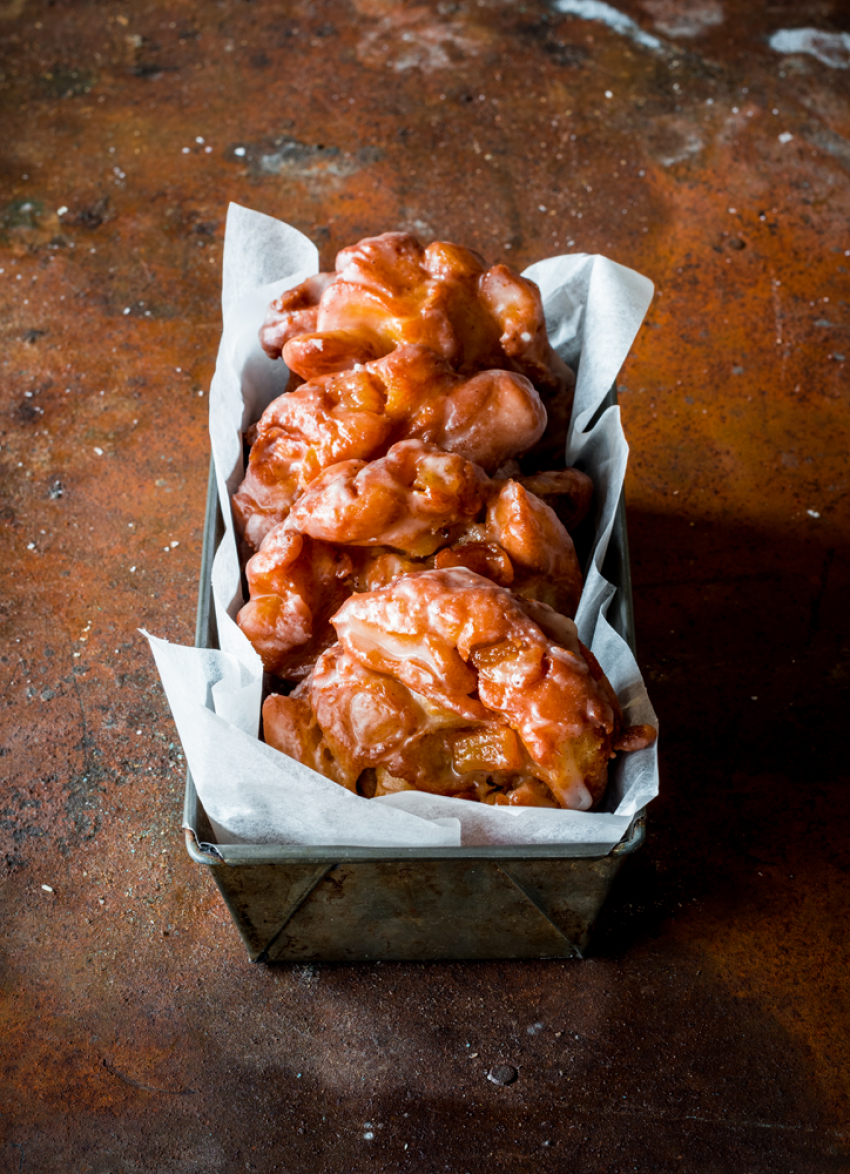 Deep-fried brioche dough is dotted with chunks of caramelised apples and dipped in a maple and cinnamon glaze – delicious!

Dough: Heat the milk until it is warm, but not hot, in a small saucepan. Remove from the heat and add the sugar and dried yeast, stirring to combine. Set aside for 10 minutes until the yeast has dissolved and the surface is foaming.

Add the egg and melted butter to the milk mixture and whisk to combine. Pour into the bowl of a stand mixer along with the flour and salt. Using the dough hook, or by hand, knead for 10 minutes until the dough is glossy and smooth.

Lightly flour a clean surface and knead the dough into a ball. Place in a large, clean bowl and cover. Place in a warm spot to rise for 1½-2 hours, or until it is doubled in size.

Cinnamon apples: Place all the ingredients in a large non-stick frying pan. Cook over a medium heat for 8-10 minutes, or until the apples have softened and a golden caramel begins to form around the fruit. Set aside to cool.

On a clean floured surface roll the dough out to a roughly 1cm-thick circle. Scatter the cinnamon apples over half of the dough. Fold the non-apple side of the dough over the apples to create a half circle. Using a bench scraper or knife, cut the dough horizontally into 3cm-wide strips; don’t separate the strips out. Then cut the dough vertically so you now have 3cm-wide cubes of dough. Don’t worry if the apples ooze out; this cutting method is just to help incorporate the apples into the dough mixture evenly.

Flour your hands and gently bring the dough together into a log roughly 40cm in length. Cut the log into 12 equal slices and shape into mounds. The tighter the mound, the less likely the apples are to fall out while frying. Place the fritters on the prepared baking trays and cover. Leave to rise for 30 minutes.

Glaze: In a bowl, whisk together the icing sugar, maple syrup, vanilla paste, cinnamon and a little boiling water to help loosen it, then set aside.

To cook: Bring a large pot of rice bran oil to 180oC. To test if the oil is at the right temperature, drop a small amount of the dough into the oil; if it sizzles and floats the oil is ready.

Line a baking tray with paper towel and top with a wire rack.

Cooking 2-3 at a time, gently lower the fritters into the hot oil and fry for 1-2 minutes on each side, or until they are golden brown. Using a slotted spoon, remove the fritters and place on the wire rack to drain and cool slightly. Repeat with the remaining fritters.

While the fritters are still warm, dip one side of each into the glaze. Place on a wire rack and allow the glaze to set fully before eating.