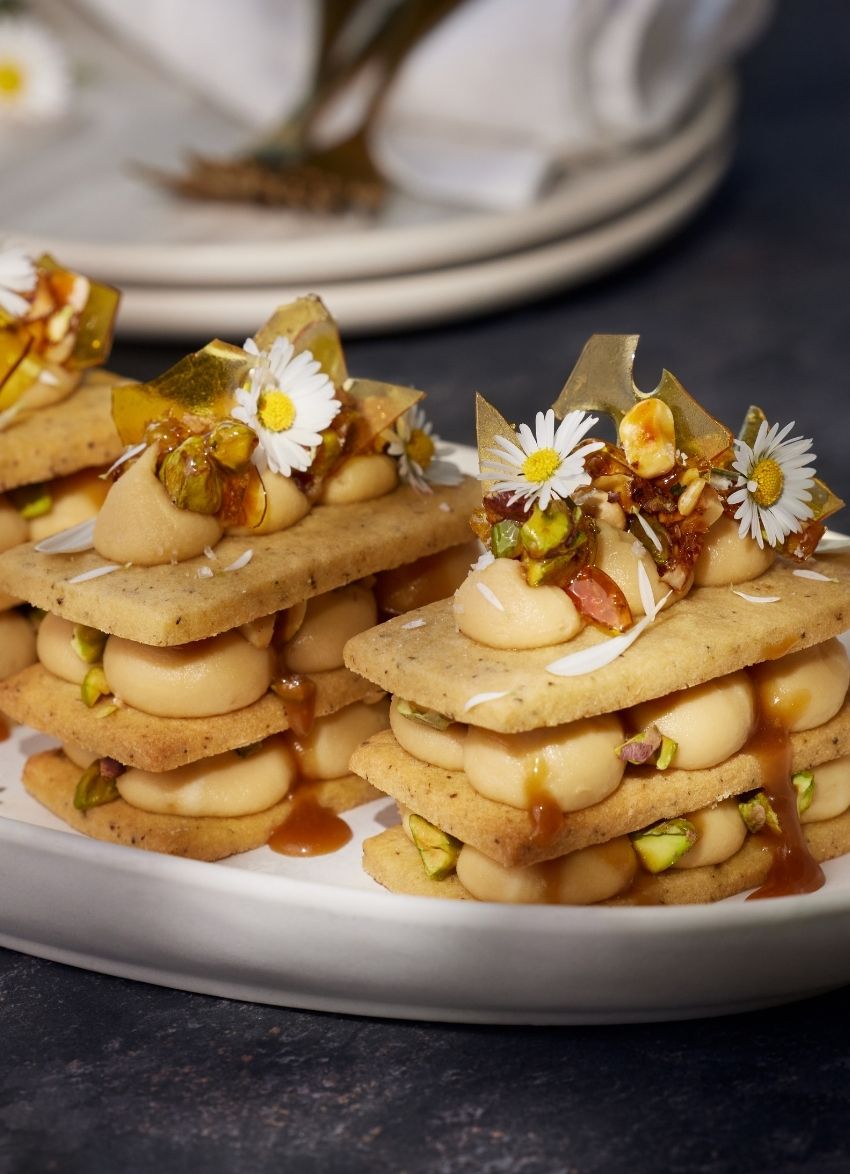 BROUGHT TO YOU BY Westgold

Just wow! A layered dessert with a modern twist on a traditional French shortbread (sable). Made up of thin sable layers separated with a caramel mascarpone, drizzled in a caramel sauce and topped with nutty, salted caramel praline.

To make the sable biscuits:
Using an electric mixer, cream the butter and sugar until light and creamy.

Add the vanilla and yolks one at a time.

Empty the dry teabag contents into the butter mixture. Add the flour and salt and mix until just combined.

Roll the mixture between 2 sheets of baking paper into a 40cm x 24cm rectangle. Place in the fridge until firm.

Preheat the oven to 150 degrees.

Peel the baking paper off both sides, trim the sides and cut the sable into rectangles (the size we used was 4cm x 8cm).

Bake the sable biscuits on baking paper for 12-13 mins until slightly coloured around the edges. Set aside to cool.

To make the caramel:
Place all the ingredients except the mascarpone and nuts into a saucepan and stir until dissolved. Simmer for 3 mins, remove from the heat and set aside to cool.

When the caramel is cool add ½ of the caramel to the 2c mascarpone and stir until combined.

Spoon into a piping bag and refrigerate until needed.

To make the nut praline:
Sprinkle the sugar in a heavy based pan in a thin layer.

Put on a medium heat and the sugar will soon start to melt. Tilt and gently shake the pan to move the unmelted sugar around and keep cooking until all the sugar is melted and a golden colour.

Tip in the nuts and toss them in the caramel.

Pour the praline onto greased baking paper and spread out thinly. Set aside to cool.

To assemble:
Chop the praline into small chunks. Place the bottom layer of sable biscuits on a serving platter.

Pipe the caramel mascarpone onto the sable, sprinkle some of the chopped roasted nuts on top and drizzle with caramel sauce.

Repeat with the next layer of sable.

Top with the final sable, pipe on more mascarpone and decorate the top with praline, sea salt flakes and fresh camomile flowers.

Serve with the spare caramel sauce.