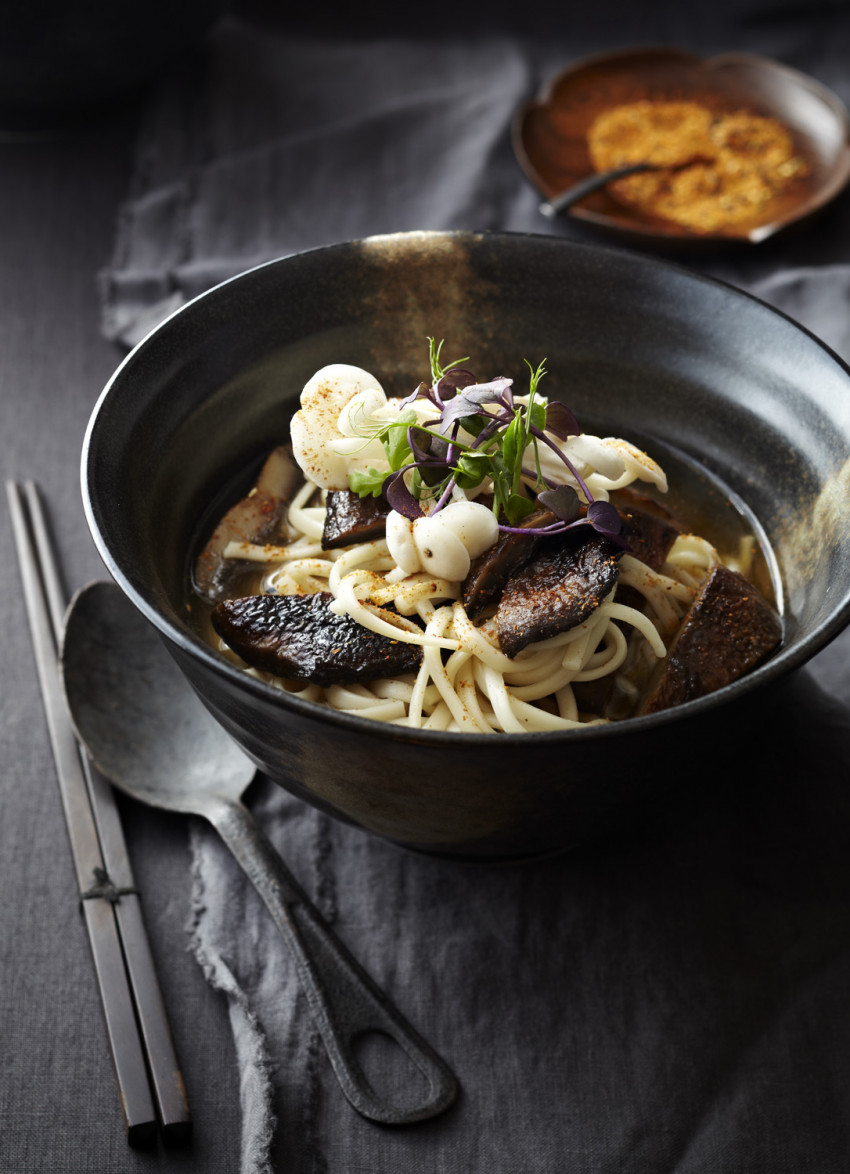 Ramen to soba, rice sticks to bean thread – the world of noodles is as diverse as the ways in which they can be prepared.

There are few things more satisfying than a bowl of glistening noodles. Whether they’re plump and white, egg-yellow and slim, opaque and slippery, crunchy or crisp, noodles have been a staple of many food cultures for centuries.

Noodles are at the heart of some of the world’s most famous dishes: Singaporean/Malay Laksa lemak, Shanghai-style Chow mein, Malaysia’s Mee goreng, Thailand’s Pad Thai, the heart-stoppingly hot and sour Thai Tom Yum soup, Japanese Yaki Udon with seafood and the tasty Vietnamese chicken noodle soup Pho Ga are just some of the infinite ways noodles can be served.

Noodles are made from a variety of rice and wheat flours (with or without egg added), as well as vegetable starches such as mung bean or sweet potato.

Egg noodles classic noodles made with wheat or rice flour, eggs (the yolk being all-important for colour and texture) and water. These remain one of the most common varieties of noodle throughout Asia, both dried and fresh. They can be fine or ribbon-cut and most are sold in little nests or bundles. Boil egg noodles in plenty of boiling salted water until tender. Drain, rinse in cold water and drain again.

Hokkien mee noodles are made from egg and wheat flour and are reasonably thick, almost resembling spaghetti. Fresh hokkien mee are usually sold dipped in oil to prevent them sticking, so rinse in boiling water before adding to dishes.

Ramen noodles are similar to the Chinese egg noodle, but traditionally with the addition of an alkaline mineral water known as kansui. Ramen also refers to a Japanese broth and noodle dish of the same name, which varies widely depending on the range of ingredients added to it. Ramen are usually sold dried and can be cooked in the same way as egg noodles.

Somen are very thin, white noodles. Usually sold dried in packets of banded bundles. Cook somen in boiling water, adding a cup of cold water each time the water returns to the boil. When tender, drain and rinse and drain again. This helps remove excess starch. Dip briefly into boiling water to reheat before serving. Udon and soba also benefit from being cooked this way.

Soba noodles are common to Japan and Korea. Usually sold dried, they come in long squarish-round strands. True soba are darker in colour with a pronounced nutty flavour and are often served in a seasoned dashi broth with condiments.

When mixed with powdered green tea, they become cha sobaand are excellent for making delicious cold summertime noodle salads mixed with seaweeds and fresh herbs with dipping sauces on the side. Most soba also contain a percentage of wheat flour. See Somen (above) for advice on cooking.

Fresh rice noodles are available in the chiller of Asian supermarkets. They are normally sold in sealed plastic bags either in ribbons or in sheets, which can be cut into strips. The fresh noodles are coated with oil to prevent them sticking together. Pour hot water over them to soften if they are firm from being refrigerated. Then either fold them into soups, or gently stir-fry with a spicy sauce.

Dried rice noodles are opaque and come in many shapes: super thin they are called vermicelli while ribbon-like strands are rice sticks (used in Pad Thai). They turn white when cooked. Prepare by pouring boiling water over them and leave to soften before adding to soups or stir-fries, or boil until al dente. Dried rice noodles can also be deep fried but expand quickly.

Bean thread noodles are also known ascellophane, glassor transparent noodles and are usually made with mung bean starch. There is also a sweet potato flour version popular in Korea, known as dang myun. This category of noodle is defined by their deliciously firm, slippery texture and gloss. Pour boiling water over them and leave to soften. Add to soups or braised dishes, or drop into hot oil to create puffy little threads to garnish.

Shirataki or Sukiyaki noodles are made from a Japanese root vegetable, known as ‘devil’s tongue’. Look for these noodles in the chiller of Asian supermarkets where they are packed in water in plastic tubes.

Dried noodles can be stored in an airtight container in the pantry. Fresh noodles will last 2–3 days in a sealed plastic bag in the refrigerator.