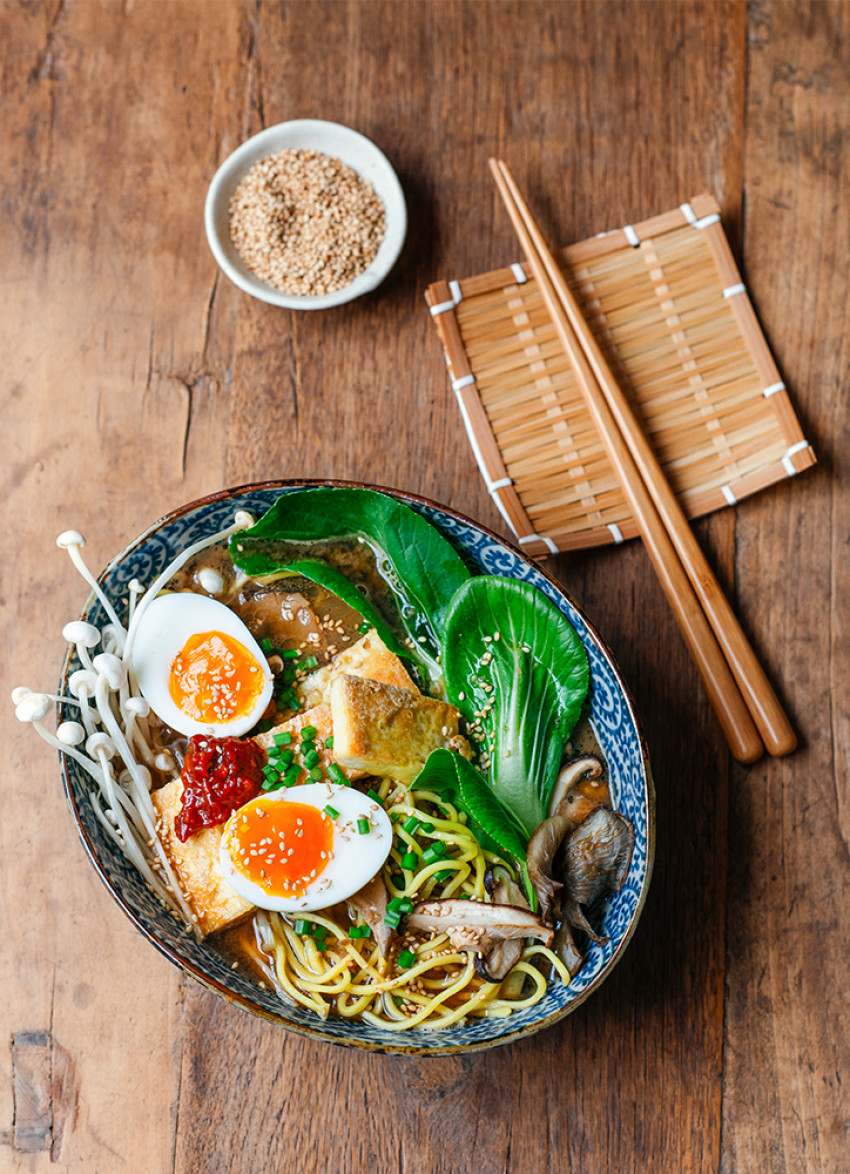 Oxford Languages dictionary defines a noodle as "a very thin, long strip of pasta or a similar flour paste, eaten with a sauce or in a soup." Yet a flavourfully sauced bowl of stretchy bouncy noodles is far more than the sum of its parts. Today, on International Noodle Day, we explore our favourite noodles, their origins, properties, texture and best sauce partners.

There are few things more satisfying than a bowl of glistening noodles. Whether they’re plump and white, egg-yellow and slim, opaque and slippery, crunchy or crisp, noodles have been a staple of many food cultures for centuries. 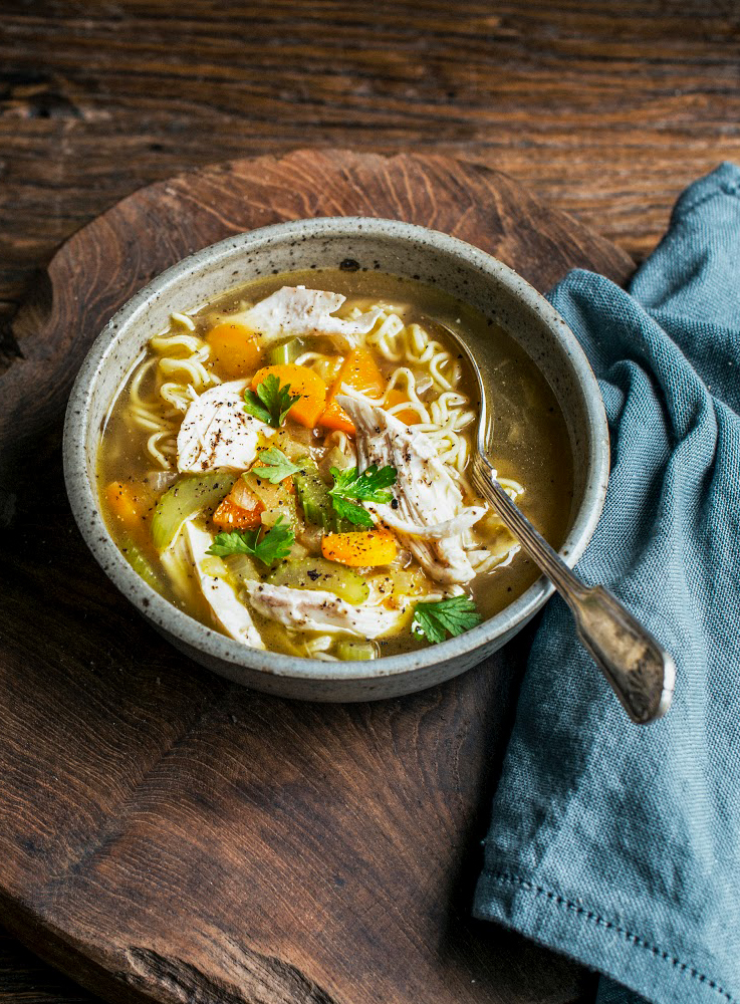 Noodles are at the heart of some of the world’s most famous dishes: Italian pappardelle au ragù; Singaporean/Malay Laksa lemak; Shanghai-style Chow mein; Malaysia’s Mee goreng; Thailand’s Pad Thai; the heart-stoppingly hot and sour Thai Tom Yum soup; Japanese Yaki Udon with seafood and the tasty Vietnamese chicken noodle soup Pho Ga are just some of the infinite ways noodles can be served.

Noodles are made from a variety of rice and wheat flours (with or without egg added), as well as vegetable such as mung bean or sweet potato. Here is our non-exhaustive list of some of the best.

Hokkien mee noodles are made from egg and wheat flour and are reasonably thick, almost resembling spaghetti. Fresh hokkien mee are usually sold dipped in oil to prevent them sticking, so rinse in boiling water before adding to dishes. 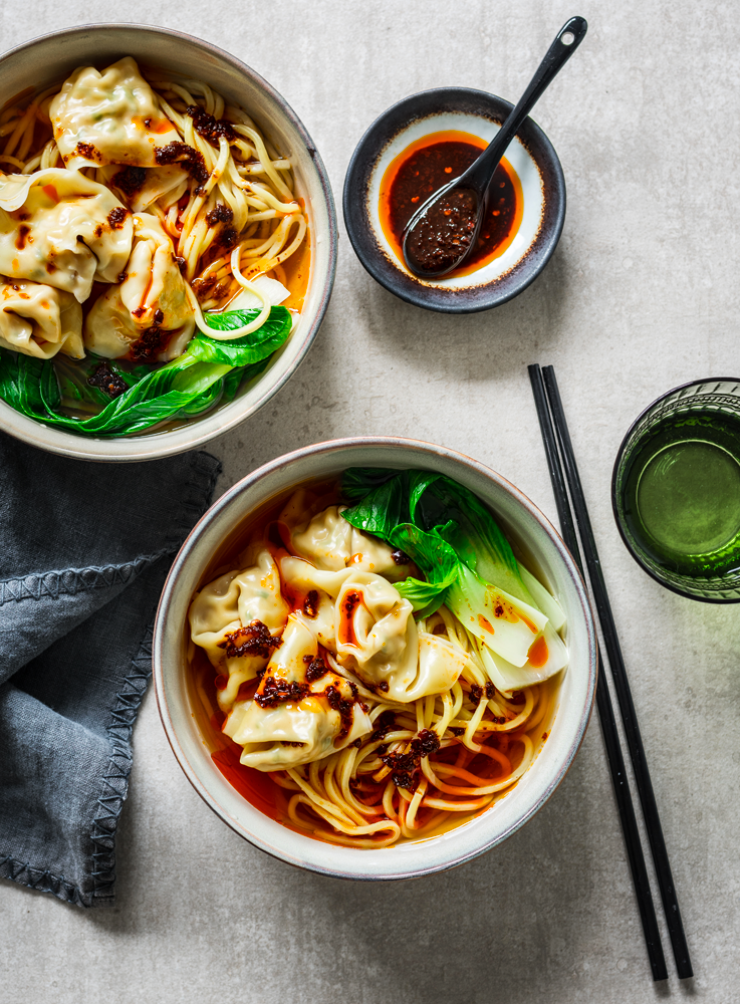 Egg noodles classic noodles made with wheat or rice flour, eggs (the yolk being all-important for colour and texture) and water. These remain one of the most common varieties of noodle throughout Asia, both dried and fresh. They can be fine or ribbon-cut and most are sold in little nests or bundles. Boil egg noodles in plenty of boiling salted water until tender. Drain, rinse in cold water and drain again. These are an excellently easy and fresh accompaniment to some of our favourite dishes such as Chicken Wonton Noodle Soup.

Ramen noodles are similar to the Chinese egg noodle, but traditionally with the addition of an alkaline mineral water known as kansui. Ramen also refers to a Japanese broth and noodle dish of the same name, which varies widely depending on the range of ingredients added to it. Ramen are usually sold dried and can be cooked in the same way as egg noodles. Our Vegetarian Ramen (pictured at the top of this page) shows these off beautifully or if you'd rather try then from one the many great ramen shops, we love Symonds Street's Ramen Do.

Somen are very thin, white noodles. Usually sold dried in packets of banded bundles. Cook somen in boiling water, adding a cup of cold water each time the water returns to the boil. When tender, drain and rinse and drain again. This helps remove excess starch. Dip briefly into boiling water to reheat before serving. Udon and soba also benefit from being cooked this way. Try somen for yourself with our recipe for Miso, Shiitake Soup with Prawns and Somen Noodles.

Udon are a slippery, plump white Japanese noodle. Usually sold vacuum-packed and most often served in light, fragrant broths with varying accompaniments, like this Sweet Potato and Yellow Curry Soup with Udon Noodles. 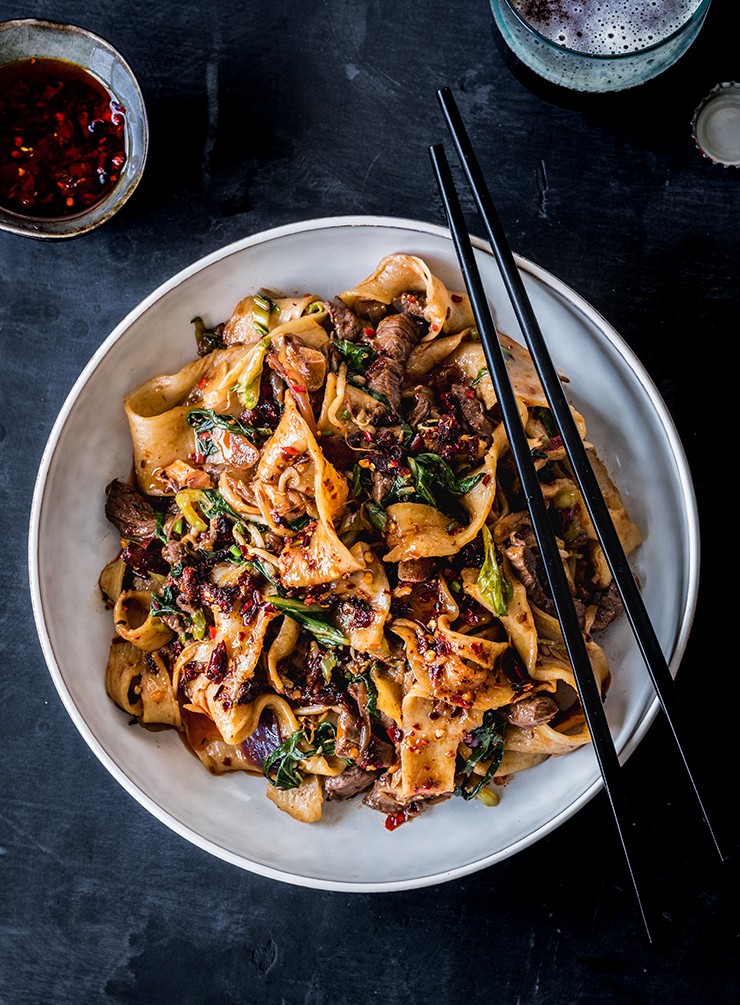 La Mian, Also known as hand pulled noodles or biang biang noodles, you can find these at some of our favourite noodle eateries, such as King Beef Noodle, where a glass wall allows you to see the chef pulling the noodles by hand. The stretching motion gives the noodles a uniquely stretchy and bouncy texture that goes down a treat with a rich sauce or broth. Try your own hand at hand-pulled noodles with our Hand-Pulled Noodles and Cumin Lamb recipe. 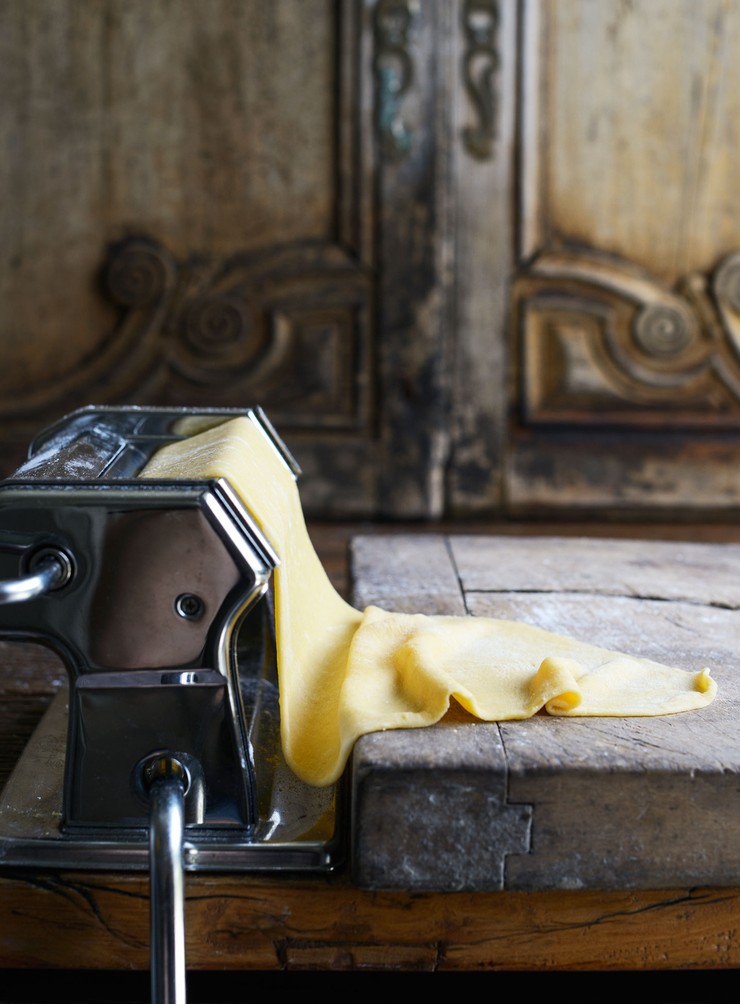 Pasta dough ready to be cut into shape

If we had to compare pasta to any other kind of noodle, we would say they are most like egg noodles - made of egg, and (usually) wheat flour plus a dash of olive oil. But since there are over 350 shapes of pasta, the Italian staple deserves its own category. 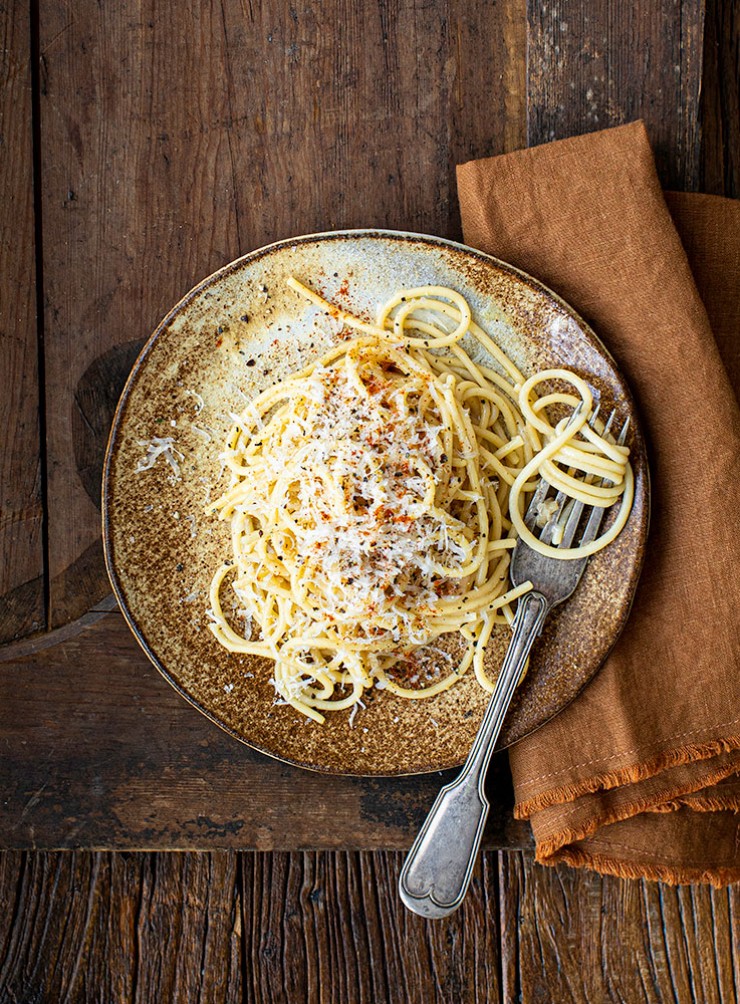 The most well known noodle varieties of pasta are of course spaghetti, linguine, fettucine, pappardelle, and tagliatelle, but there are numerous pasta noodle shapes, with slightly different widths and cross section shape designed for slightly different sauce types, from our Prawn Chorizo and Chilli Pasta, Leftover Lamb Ragù to Three-Pepper Cacio e Pepe.

Our editor Sarah Tuck's failsafe pasta dough recipe can guide you to your own perfect homemade pasta, or to try the real deal without the effort of making it at home, our pick of pasta purveyor is the Mount Eden restaurant, Pasta e Cuore.

Soba noodles are common to Japan and Korea. Usually sold dried, they come in long squarish-round strands. True soba are darker in colour with a pronounced nutty flavour and are often served in a seasoned dashi broth with condiments. We are fans of Soba Noodles with Leek and Miso Sauce and Black Pepper Tofu.

When mixed with powdered green tea, they become cha soba and are excellent for making delicious cold summertime noodle salads mixed with seaweeds and fresh herbs with dipping sauces on the side. Most soba also contain a percentage of wheat flour. See Somen (above) for advice on cooking.

Fresh rice noodles are available in the chiller of Asian supermarkets. They are normally sold in sealed plastic bags either in ribbons or in sheets, which can be cut into strips. The fresh noodles are coated with oil to prevent them sticking together. Pour hot water over them to soften if they are firm from being refrigerated. Then either fold them into soups, or gently stir-fry with a spicy sauce.

Dried rice noodles are opaque and come in many shapes: super thin they are called vermicelli while ribbon-like strands are rice sticks (used in Pad Thai). They turn white when cooked. Prepare by pouring boiling water over them and leave to soften before adding to soups or stir-fries, or boil until al dente. Dried rice noodles can also be deep fried but expand quickly.

Whether you choose dried or fresh, our recipe for Rice Noodle and Coriander Omelette with Chili Prawns shows off the versatility of rice noodles beautifully.

Bean thread noodles are also known as cellophane, glass or transparent noodles and are usually made with mung bean starch. There is also a sweet potato flour version popular in Korea, known as dang myun. This category of noodle is defined by their deliciously firm, slippery texture and gloss. Pour boiling water over them and leave to soften. Add to soups or braised dishes, or drop into hot oil to create puffy little threads to garnish. If you're looking to try an authentically prepared bean thread noodle, try the glass noodles at Auckland's Sunny Town.

Konjac, Shirataki or Sukiyaki noodles are made from the 'corm' or bulbo-tuber of the Japanese konjac plant, also known as ‘devil’s tongue’ (which looks quite like a lily). It has a mild taste and crunchy and watery texture. The noodles are a fresh accompaniment to aromatic sauces and broths, as in our Fish Curry with Konjac Noodles. Look for these noodles in the chiller of Asian supermarkets where they are packed in water in plastic tubes.

Zoodles, or zucchini Noodles are noodles made by thinly slicing, spiralising or julienning fresh zucchini. They are a juicy, warm-weather and not to mention healthy noodle that takes on the flavour of whatever sauce they are put in. Our recipe for Zucchini Noodles, Raw Tomato Sauce and Halloumi is proof that the zoodle deserves a spot in your repetoire.

The noodles pictured in the hero are Sarah Tuck's Vegetarian Ramen Noodles.