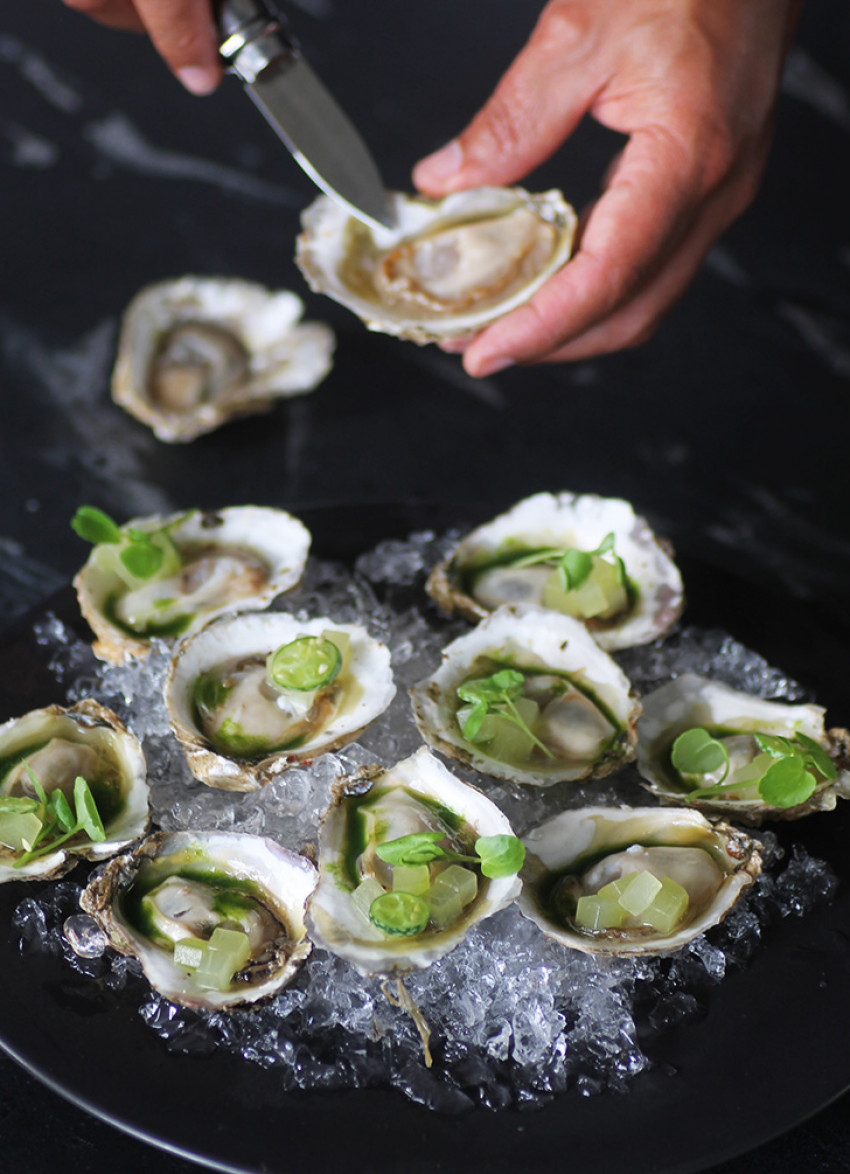 Every March, Nourish Group Executive Chef Gareth Stewart grabs his gumboots and makes the annual pilgrimage down south, to savour the very best of the new season Bluffies. We discover what makes this fly-by visit somewhat out-of-the-ordinary.

How long have you been making the great Bluff pilgrimage down south?
"This will be the third year – I’ve been every year since I joined the Nourish Group in 2015. It’s something I look forward to, it’s like going back to see old mates."

Talk me through the process, from start to finish...
"I fly down on the 28th, then go down to the wharf and say "hi" to the skipper. If I’m going out on the boat, I’ll try and grab a few hours’ sleep if I can, then I’m heading out on the boat by 11.30pm. That means we’re out on the oyster beds by midnight, when the season officially opens. The boat will dredge oysters until about 10.30am in the morning; they keep going until the boat’s completely full, you’re just surrounded by oysters. It’s a hard night for the fishermen – I have the utmost respect for them.

The oysters then come back into port, come off the boat, and are counted and boxed at the Ngai Tahu processing plant. I’ll take my allocation, then get to the airport as quick as I can so that I can get back to Auckland and start serving them. This year I’m hoping to come back with 1,000 dozen.

To bring them back to Auckland I’ve booked space for the oysters with our friends at Air New Zealand – I need to make sure they’ll get back for Euro’s All-you-can-eat First Haul Lunch on the 2nd of March."

What do you think makes Bluff oyster season so special to Kiwis, when we’re inundated with fresh seafood?
"I think because it is a season – that sense of anticipation that builds each year. There’s only a short period when you can get these fabulous oysters and then you have to wait months for them again. There’s definitely a sense of excitement as you build up to March each year."

There’s a great partnership at play here – how did it come about?
"The Nourish Group has always prided itself on sourcing oysters from Bluff each year, but since I came on board I’ve really made the effort to strengthen the relationships I have with all the people down there. I go down for the opening of the season each year, and have also gone down there just to have a coffee and shake someone’s hand.

People from Bluff regard that as quite important – a handshake means more than a contract."

What can Bluff-oyster lovers expect from the Nourish Group this coming season?
"The Princes Wharf Oyster Festival we’re holding on the wharf during March is all about celebrating oysters. Some very lucky people will be eating as many oysters as they can this Friday at Euro’s First Haul lunch, we’re matching Bluffies with Panhead beer at The Culpeper on 14 March, and then there’s the Oyster and Music Festival at The Culpeper on 24 March, when we’re giving away the first 200 dozen oysters. And loads more events and specials at all our restaurants and bars on the wharf – Euro, The Culpeper, Coley & Punch and The Crab Shack."

Where’s the best place you’ve enjoyed seafood?
"Eating those first oysters of the season in Bluff each year is pretty special, but away from New Zealand it would have to be Croatia. I remember going to this fish market and just being blown away by all the amazing seafood there. The lucky, lucky people I was cooking for had fantastic meals there – I remember stuffing all kinds of fish, braising octopus, searing squid."

What’s an unconventional way (if you have one) that you personally enjoy your oysters?
"I love them freshly shucked with a squeeze of lemon and a cheeky dash of Tabasco."

A lot of Kiwis would have no idea just how hands-on you are with the Bluff Oyster sourcing process. Why is it so important for you to be as involved with this process as you are?
"Provenance is really important to me – every ingredient I source for the Nourish Group has to be the best of the best, and wherever possible I like to meet the people growing, farming or harvesting the produce I’ll be cooking with.

And of course, people are obsessed with Bluff oysters, and so I have to make sure that I can get them! That means going down to Bluff to maintain my relationships with the people down there, and personally collecting my allocation of oysters. They’re actually quite a hard commodity to get hold of."

Do you think there’s a place in the world for deep-friend Bluffies or is it sacrilegious?
"Deep-fried Bluffies are beautiful! Tempura or beer battered, they’re delicious, so long as you get the batter right (it has to be nice and light), and don’t over-cook them."