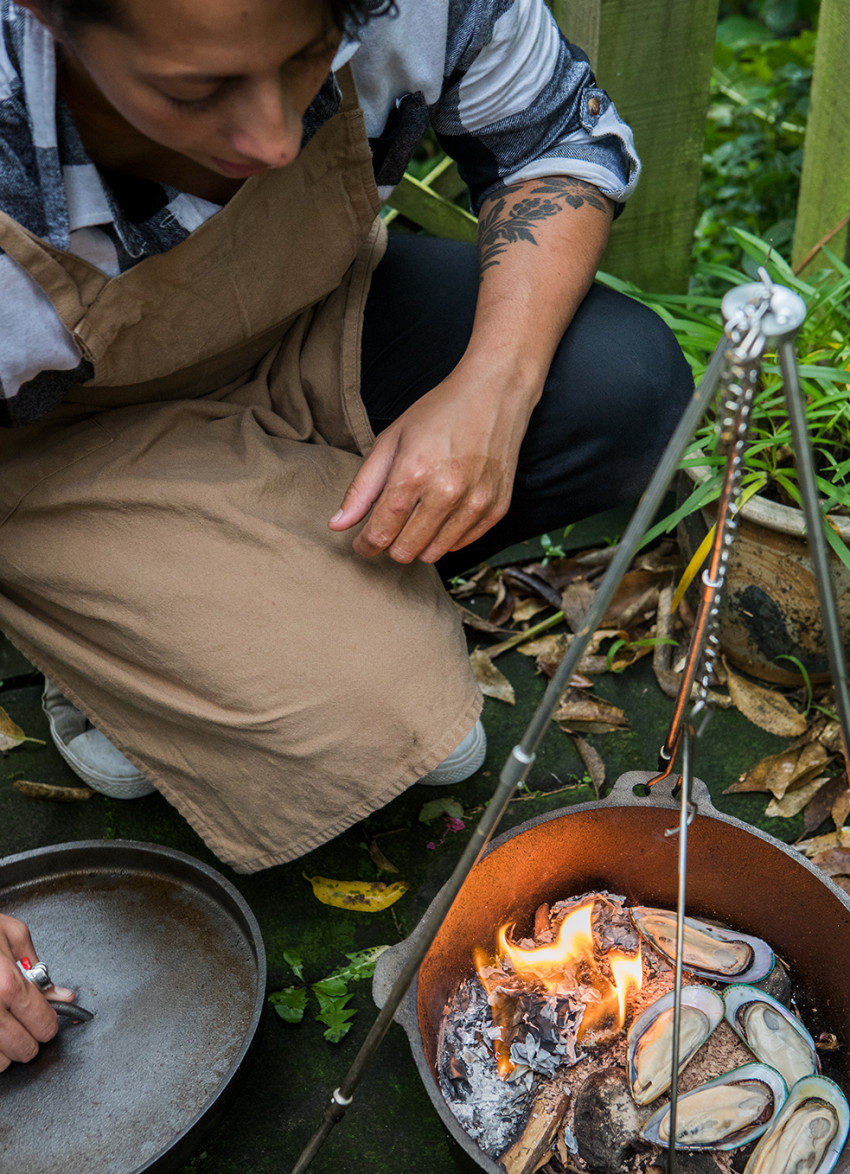 After seven years of working in restaurants in New York, chef Monique Fiso returned to New Zealand with a passion for modernising traditional Māori cuisine.

In a wind-whipped paddock north of Wellington, Monique Fiso is trying to pitch a tent. It’s wet, muddy and a few swear words nibble at the edges. But it’s all part of Hiakai, a series of pop-up restaurants held in tents which reimagine traditional Māori cuisine in a contemporary context.

Monique started Hiakai after returning to New Zealand in early 2016, following seven years in New York (including three at the Michelin-starred Musket Room where she fed everyone from Robert de Niro to Bruce Springsteen).

Hiakai is Māori for hungry, which the acclaimed chef most certainly is.

“I’ve always been a little pig,” laughs the 29-year-old. “But Hiakai is also about being hungry for knowledge and discovery. In my case, that involves finding out about traditional Māori ingredients and techniques so that we don’t lose the cuisine.”

But with a twist: think paua porridge with celery cream and puffed wheat, boil-ups studded with pork bones and doughboys, and the much maligned rotten corn which, minus the whiffy smell, has morphed into a sweet ice cream.

Hiakai’s centrepiece is a hangi, which involves the usual hot rocks and hours of waiting around, but in Monique’s world the food comes encased in ferns, rangiora leaves and paaro (harakeke) baskets she taught herself to weave. “People say things like, I don’t like hangi, it all tastes the same. But cooking hangi the authentic way – stripped back with no tin-foil or wire baskets – tastes like nothing you’ve ever tasted before.”

The half Māori/half Samoan chef has been doing interesting things with food since she was four years old.

“I can remember standing on a stool frying an egg for my father’s breakfast. He wasn’t terribly pleased I was cooking unsupervised, but he loved that I was so passionate about food, even back then.”

Her Porirua childhood home was hardly a foodie one: five children and a new call centre business meant there was a lot of KFC and Chinese takeaways.

“My parents were so busy setting up their business that food wasn’t really a consideration. But as a six-year-old I would flick through cookbooks at the local library and my father would take me to the supermarket so I could recreate those dishes.”

By the tender age of 10, Monique was turning out roast dinners and dishes she could barely pronounce. Despite her parents’ warnings about how hard and badly paid the industry is, Monique dropped out of seventh form to enrol in WelTec’s City & Guilds cookery and patisserie diplomas. One of the course requirements was to complete 50 hours of work experience over two weeks; Monique nailed it in one, at Martin Bosley’s eponymous Wellington restaurant.

She ended up juggling a full-time job with Bosley with her studies, working from 7am until often 1am: “I learned to nap in my car.”

But a year or so of doing that was good training for The Big Apple where she moved in 2009. Monique was, she admits, woefully unprepared.

“I’d never been to the US and didn’t know anyone in New York. I dropped my bags at the hostel and headed straight to the Michelin-starred Public Restaurant to ask for a job.” She was put straight on to the hot line despite having only had experience in pastry and garde mange.

Instead of sightseeing during her hours off, Monique would head into work to watch chefs break down fish and cure meat. “It was the hardest I’ve ever worked in my life. I didn’t see any of the usual New York sights until three years after arriving.”

She did, however, have her fill of “only in New York” moments, including the time she met her hero, Anthony Bourdain. “I was catering for a Mario Batali event at the top of the Empire State Building when Anthony stopped to chat. It doesn’t get any more New York than that!”

You’ll run out of fingers naming the restaurants Monique worked at during her time there: Momofuku, Saxon+ Parole, Double Crown, A Voce, the Musket Room and the Surf Lodge in the Hamptons, among others.

But after seven years, she reached a crossroad: it was either open her own restaurant in New York (too expensive) or return home. In early 2016, she chose the latter. “I didn’t want to work for anyone else. I wanted to find my own rhythm.”

New Yorkers had often asked Monique about Kiwi cuisine and a visiting American friend, with whom she’d done a South Island road trip, was similarly curious. “She kept saying, I want to try uniquely New Zealand food, why can’t I try a hāngi? I had to tell her there are no hāngi restaurants in New Zealand.”

It coincided with Monique’s own cultural reawakening: “I’d spent most of my life ashamed of being Māori but when I started to think about the food I wanted to specialise in, I realised I actually liked Māori food. No one was doing it in the way I wanted to, plus I wanted to show that I could elevate simple ingredients and traditional cooking methods to a fine-dining level.”

She set about researching everything she could about ingredients such as karamu berries, huhu grubs and tender supplejack shoots.

Having few recipes to call on was both a blessing and a curse: “It would have been easier if there had been recipes but on the other hand, it meant I could start with a blank page”.

There were other issues: New Zealand’s fire ban means a hāngi can usually only be laid between March and November, suitable locations are generally outside the city and it isn’t always easy finding certified suppliers. But Monique did it the way she does everything – with laser focus and 80 hour weeks.

Last year Hiakai launched with six pop-ups in restaurants, including Merediths in Auckland, Bracken in Dunedin and Bistronomy in Napier. All were sold out events but Monique felt there was a disconnect between the food and the culture.

That’s why this year’s five pop-ups will be held in windswept paddocks, like the one we’re currently in. Monique will bring a tent large enough to seat 10, plus one for cooking (she recently bought a ute to transport them around the country).

Around 70 per cent of the ingredients will be foraged from sustainable sources, and only after a karakea (prayer) is said. “It’s about being respectful of the land and the cuisine, of caring for the environment and being ethical.”

If you’d told Monique two years ago her life would revolve around a tent in a muddy field, she would have probably have laughed at you.

“Back then I was partying hard in New York and now I’m wearing gumboots and driving a ute. It’s quite a change. But life is good and I’m really privileged that I can raise the bar for Māori food.”

To learn more about Monique and Hiakai, see her website here.