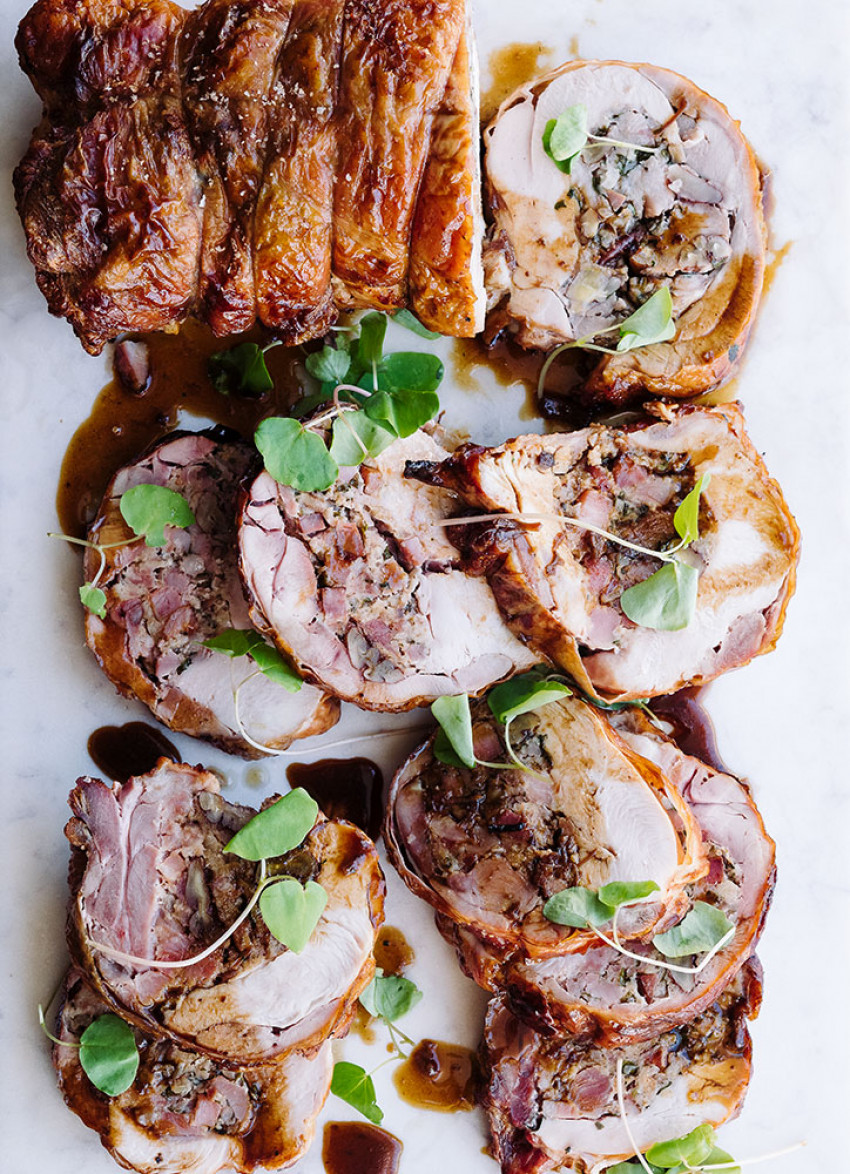 For the stuffing: Heat the oil and butter in a frying pan over medium heat. Fry the onions, garlic and herbs until soft but not coloured. Set aside to cool.

Heat the canola oil in a separate frying pan, then fry the pancetta until golden. Transfer to paper towels to drain and cool.

Combine the pecans and maple syrup in a small saucepan over medium heat, and cook until the pecans are caramelised and coated in the syrup. Set aside to cool then chop.

Combine the pork belly mince, breadcrumbs, onion mix, pancetta and pecans in a bowl and mix well to combine. Season generously with salt and pepper.

For the turkey: Lay the bird on a chopping board, breast side up, with the legs facing away from you.

Locate the wishbone and run your knife down either side of it to help remove it. Run your knife down each side of the breast bone, removing the breast meat from the carcass but keeping all the meat in one piece. Snap the leg bones to remove them from their joints but do not cut through any flesh.

Continue to guide your knife around the carcass and underneath the back bone. Use your fingers to force the meat away from the bone, being careful not to split the skin.

Once you get to the wing bones, again, start to gently use your fingertips to help ease the meat away from the carcass. Take care not to split the skin, as you’ll need it in one piece to roll at the end.

Once you’ve worked the meat away from the main carcass, cut through the thigh bone to release the carcass on both sides. You should now have the two breasts attached from where the back bone was and the two legs with the bones in.

Carefully remove both the thigh bones and the drumstick bones from the turkey by scraping back all the meat, making sure there is no cartilage left behind.

Lay out the turkey so you have both boned out legs closest to you. Flatten out the meat so it’s all one level, making slits in the tenders and pressing it down. Place the stuffing in the middle of the turkey. Push the legs over the stuffing and roll up the turkey into a long sausage shape, keeping the sides in as you go.

Use string to tie the bird, making one loop lengthwise, and then 8-10 smaller pieces to go around the roll. The more string the better.

Preheat the oven to 240˚C. Season the tukey with flaky salt and place onto a rack over a roasting tray. Place in the oven for 15 minutes to colour and seal the turkey, then reduce the temperature to 130˚C and cook for around 1 hour 45 minutes, or until the internal temperature is 68˚C (use a meat thermometer to check). Rest the turkey for 15-20 minutes before carving and serving