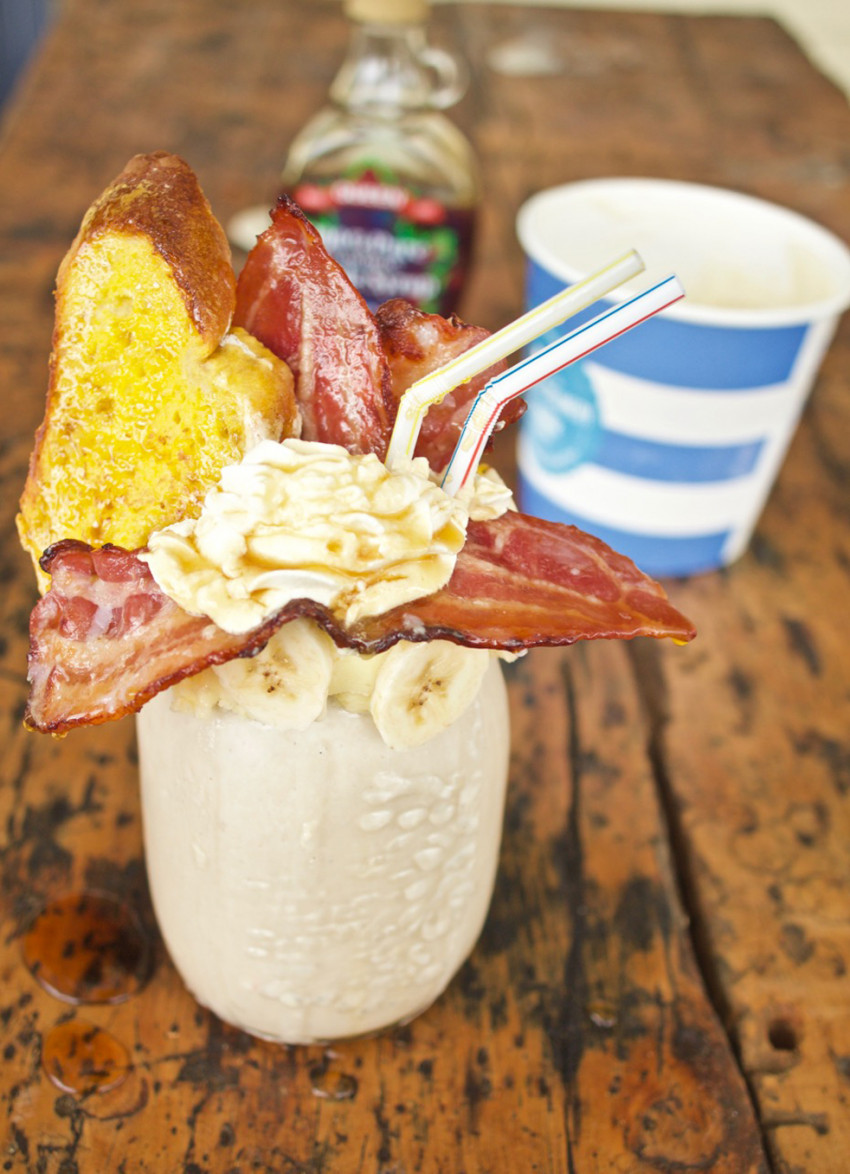 I guess eventually their popularity spread enough that someone made the book Monster Shakes. This book sat on my desk for quite some time before I could work up the energy to construct one of them. At first I thought they'd be easy but each milkshake has so many elements in it – from making doughnuts to waffles or brownies to top the milkshakes with, to buttercream frostings, syrups, sauces and other garnishes. I'm usually happy to spend many an hour in the kitchen working on putting together a meal or even just a dessert but spending all that time on a semi-ridiculous milkshake somehow didn't appeal to me.

After pouring through the book for quite some time I finally settled on a breakfast-themed shake – the Maple-Bacon French Toast Bananapalooza – because it looked less kitchen-intensive than the others. But also, if there is one food that seems to always seems to be on-trend online it's bacon (while I do enjoy the occasional good-quality bacon, the glorification of bacon and bacon culture in general has gone too far in my opinion).

I started by making the candied bacon, baking 4 strips of bacon in a 180°C degree oven until browned, then brushing with maple syrup and returning to the oven for another 5 minutes.

I left the bacon cooling on a rack and made the caramel syrup – the recipe had both white and brown sugar in the ingredients and when the first line said to “combine the sugar with 60ml of water” I assumed both sugars... it was only when I got the saucepan on the stove top that I wondered how I'd know the sugar was caramelising, read the recipe through and saw that the brown sugar was to be added with the cream after caramelising the white sugar. After tipping the saucepan down the sink and measuring out the sugars again I combined the white sugar with the water and cooked on a medium heat until it started to turn brown and then with a camera in one hand added the brown sugar and cream, if I had a third hand I would've stirred them in and probably could've avoided a few large lumps where the brown sugar stuck to itself under the heat of the caramelised white sugar. But it didn't really affect the syrup which was delicious.

Then I beat an egg and some milk together to dip slices of bread into for the french toast. After frying the slices of soaked bread I put them to one side.

Just before putting the milkshake together I whipped some cream and put it into a piping bag fitted with a star nozzle.

Finally I could actually make the milkshake! I weighed out some mashed banana and added it into a food processor with some of the caramel syrup, a scoop of ice cream, milk and a half a teaspoon of cinnamon. After blending, it was time to serve in, yep you guessed it, a mason jar. Personally I think mason jars are better suited to preserving food in but they did point out the lip works really well to support the frosting, which I spread around the lip with a spatula. Then I carefully placed slices of banana around the rim, filled the jar with the milkshake and a scoop of ice cream, topped with the candied bacon, whipped cream, french toast and then both the caramel syrup and maple syrup.

The milkshake was delicious but it was hard for it to not be really – milk, ice cream, bananas, caramel –what’s not to like? In hindsight, maybe I should've tested out one of the more adventurous flavours like Chai Nougat Bonanza or Brandysnap Matcha Madness. However, I was happy to see, and taste, the inclusion of cinnamon, which in my opinion is the key to a truly excellent banana milkshake. The bacon was sweet and salty, but there was quite a lot of it in there, I ate some on its own and some I ate with the now cream and milkshake covered french toast, which was actually quite pleasant. However after a few decent sips and consuming most of the toppings I started to feel a little sick. It wasn't overly sweet but there was just so much of it, and it was all so rich. I had eaten a sandwich for lunch maybe 2–3 hours before but I couldn't finish it. I'm glad I only made one milkshake instead of the full recipe for two. I was happy to note a fair few other “healthier” recipes and even vegan options. But mostly the book is a sugar overload.

I guess when you focus a book on one subject, you pigeon-hole your audience and really I don't think I have any interest in monster shakes, not consuming them nor creating them. This book isn't bad and I think it is valid as a cookbook for people who want to try and make ridiculous milkshakes, but much like a whole book about cupcakes, maybe, it's just not for me. I'm glad they included recipes for so many of the other components instead of simply telling you to buy a doughnut, which you could always make on their own, not as part of a milkshake, or the waffles, french toast, cupcakes etc.

The Book Cooked
Level of expertise required:  For the most part, the level of expertise isn't particularly high, but in the few instances you're required to do something that might be tricky the instructions are detailed. For instance, the caramel syrup wasn't particularly intimidating for me as it's something I've done quite a few times (and I wasn't reading the recipe particularly close which could explain me mistakenly adding the brown sugar) but for the more inexperienced, the steps were very detailed.
How many trips to the supermarket required? Just one! Thank goodness. To be fair, I chose a recipe I knew Ocould find all the ingredients for without much work. But if you want to recreate some of the others picture-perfectly you may have to go looking for some of the store-bought sweets/biscuits etc bearing in mind this was written for an Australian market. There were also a couple of recipes I was put off by because they asked for certain flavours of ice cream I wasn't sure I could find – pecan ice cream for instance?
How closely did your dishes resemble those in the book? I thought mine looked pretty close. I think if you're worried about them looking exactly the same you might, as I mentioned, have a hard time finding some of the exact sweets etc as in the photos but they're not really important components of the recipe, just decorations.
Pretty on the coffee table or designed to be battered through overuse? There's a reason these monster shakes took off right? They're Instagram/Buzzfeed worthy and I think this book is destined for the coffee table. The amount of prep involved makes sense for a restaurant that can make a bulk lot of buttercream, caramel syrup etc to make hundreds of shakes but it's too much work at home for a milkshake in my opinion – especially when you'd probably get just as many Instagram likes going to a cafe for a photo and at the end of the day isn't that the real reason behind a monster shake?