This is an update of an old favourite using roasted rhubarb with rich, smooth subtle white chocolate – the combination is insanely good.

Preheat the oven to 180˚C. Lay the rhubarb pieces in an even layer in a roasting dish and sprinkle with caster sugar and vanilla extract. Toss to coat evenly and roast for 15–20 minutes until soft. Leave to cool in the syrup.

Line the base and sides of a 23cm removable base tin with baking paper. Whiz the biscuits and melted butter together in a food processor until it has the texture of damp sand, then pour it into the prepared tin. Squash the biscuit crumbs into the base and halfway up the sides of the tin, using the base of a glass to press the sides firmly, and a tablespoon to compact the base. Preheat the oven to 160˚C (325˚F) and pop the base in the fridge while you make the filling.

Melt the white chocolate either in a heat proof bowl over a saucepan of simmering water (don't let the base of the bowl touch the water), or in 30 second bursts at 70% power in the microwave, stirring in between. Whisk until smooth. While the chocolate is melting, wipe out the food processor and put in the cream cheese (chopped into big chunks), sour cream and caster sugar, eggs and yolks and whiz until smooth. Mix the custard powder, vanilla and water to a smooth paste and add to the cream cheese and briefly whiz again to incorporate. With the motor running add the white chocolate in a couple of lots until well incorporated.

Pour the filling into the chilled base. Scoop out one cup of rhubarb, draining excess liquid back into the remainder, and drop the rhubarb in blobs onto the surface of the cheesecake. (Reserve the remaining rhubarb to serve alongside). Cook for 65–70 minutes, turning the oven temperature down to 150˚C for the last 5–10 minutes. The cheesecake is ready once it is fully set, but with just a little bit of wobble still in the middle. Turn the oven off and open the oven door just a little then allow the cheesecake to cool in the oven to avoid surface cracking. Once cold refrigerate until half an hour before serving. Serve as is, or with a little roast rhubarb on the side. 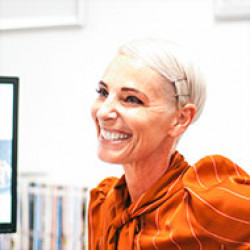 Stuck in the Kitchen